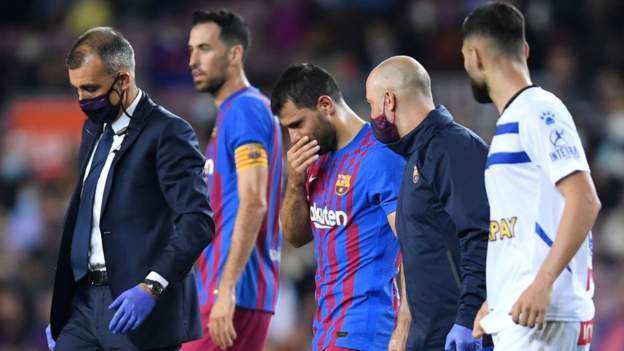 Barcelona striker Sergio Aguero has reacted to rumours he was considering retiring from football due to his chest pains.

The Argentine was taken to hospital after suffering the injury against Alaves during a La Liga clash last month.

Barcelona later announced that the 33-year-old will not play for three months while he receives treatment and his health is monitored.

In a reaction on social media, Aguero said he was “always positive”.

“Given the rumours, I tell them that I am following the indications of the club’s doctors

Read Also: Aguero set for three months out after falling sick during game

“I’m doing tests and treatment and seeing my progress within 90 days,” he added.

After starting the season with a calf problem, he made his debut last month and has scored once in five appearances for the Spanish side.

As initially reported by Catalunya Radio, Aguero may have to wait until February or March next year before being able to make a decision on his future, according to BBC Radio 5 Live’s European football expert Guillem Balague.

Aguero joined Barca on a two-year deal in the summer, but the club have not considered rescinding his contract, said Balague.

Related Topics:barcelonaSergio Aguero
Up Next