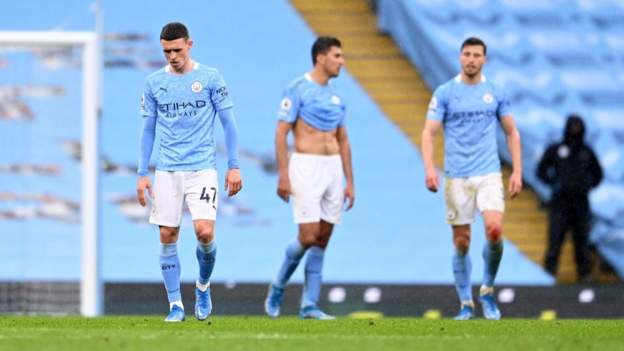 Manchester City will have to wait a little longer before lifting their third Premier League title in four seasons after losing to Chelsea on Saturday.

A late winner by Marcos Alonso ensured that the Blues stopped their hosts’ celebration as they came from behind to clinch a 2-1 victory.

The Thomas Tuchel side, who had also beaten City at the semifinal of the FA Cup, are set to meet them again at the final of the Champions League.

In a thrilling encounter that saw Argentine forward, Sergio Aguero miss an important penalty, Chelsea bagged a second win over City in the space of three weeks.

After Raheem Sterling scored the opener late in the first half, Aguero missed the glorious chance to make it 2-0 from the spot moments later when Billy Gilmour fouled Gabriel Jesus in the box.

Aguero’s dinked effort was easily saved by goalkeeper Edouard Mendy, as Chelsea improved in the second half and equalised when Cesar Azpilicueta set up Hakim Ziyech to fire home.

Chelsea had two more efforts ruled out for offside before Marcus Alonso won it for them in injury time through Timo Werner’s assist.

City needed three points to secure the Premier League title, but they have been condemned to wait.