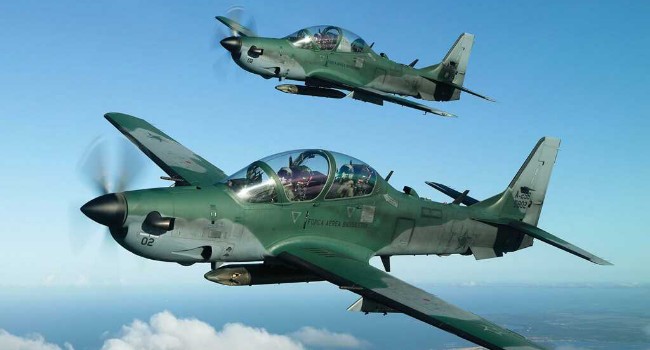 A faction of Boko Haram terrorists in Nigerian North East, Islamic State of West Africa Province (ISWAP), is said to have been degraded by the Nigerian Air Force (NAF).

NAF spokesman, Air Commodore Ibikunle Daramola, who disclosed this in a statement on Saturday, explained that scores of the terrorists were “severely degraded” in Borno following air strikes on their hideouts.

According to Daramola, NAF’s ATF scrambled 2 Alpha Jet aircraft attacked the hideout of the terrorist after intelligence information had established their presence in the area.

He said the attacks targeted three compounds and accurately hit and destroyed them as well as neutralized some of the fighters in them.

NAF spokesman said, “In continuation of its sustained air strikes against remnants of Islamic State of West Africa Province (ISWAP) elements on the fringes of Lake Chad, the Air Task Force (ATF) of Operation LAFIYA DOLE has severely degraded a terrorists’ hideout at Abaganaram in Northern Borno State.

“The attack, which took place yesterday, 31 May 2019, was executed following the discovery of the active terrorists’ settlement by a Nigerian Air Force (NAF) Intelligence, Surveillance and Reconnaissance (ISR) platform on a routine mission.

“The NAF, operating in concert with surface forces, will sustain the effort to completely degrade the terrorists in the Northeast.”

Lagos likely to revert to restriction of movement for environmental sanitation