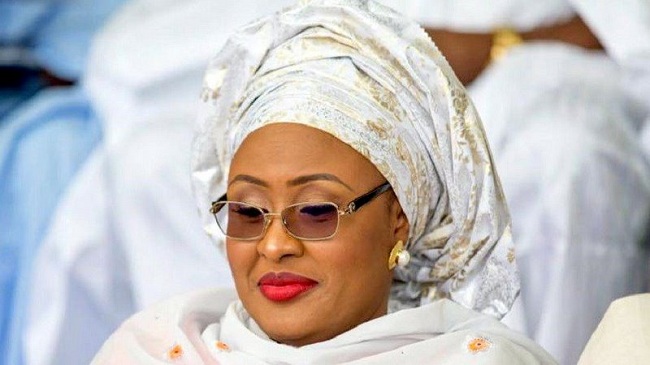 Wife of President Muhammadu Buhari, Aisha, on Sunday, took a swipe at the Minister of Communication and Digital Economy, Isah Pantami, challenging him to summon the courage to do the “right things” he has been preaching as an Islamic cleric.

The First Lady, in a veiled attack aimed at Pantami on her Twitter handle, said he has failed to live up to expectations as an Islamic scholar and needs to have the fear of God in what he does.

Aisha who also shared an old video of Pantami on her verified Instagram page, showing the Minister shedding tears during one of his sermons at a mosque, posted a cryptic message in Hausa which reads:

“A chire tsoro a yi abinda ya dace,” which translates to “Be courageous and do the right thing,” in English language.

In the short video, Pantami is seen suddenly bursting into tears when he asked his reciter to read a verse on the fear of Allah.

It is unclear why the president’s wife posted the video, but feelers from the Presidency believe she is no longer comfortable with Pantami’s recent closeness to the President where he seems to be the one arranging most of Buhari’s day to day itineraries.

In recent times, Pantami had taken up the position of a spokesman for Buhari, even coming out to tell Nigerians about the President’s feelings like he did when 25 commutters were killed in Plateau State in August.

Pantami had told Nigerians that Buhari was so devastated that he could not eat for the whole day.

That statement, amongst others, are some of the issues that are said to have angered the First Lady and she seems to have had enough, hence her decision to come out in full blast.