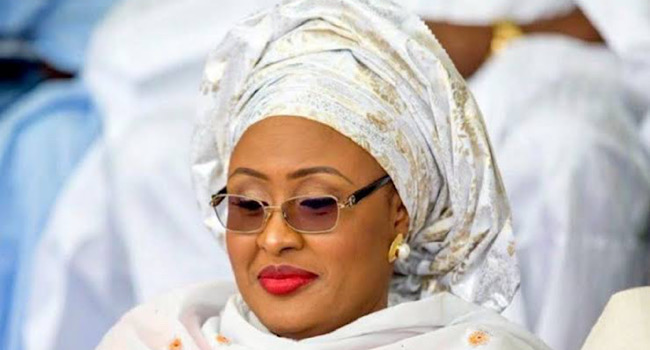 The wife of the President, Hajia Aisha Buhari, turned 50 recently. On the social media platforms congratulatory messages from concerned Nigerians and friends and well-wishers poured in for the elegant presidential spouse. Attaining two scores and ten years in a nation where the average life expectancy is much below that age bracket is a milestone indeed. Ordinarily it called for ‘golden’ celebrations, the clinking of glasses and the rolling out of the drums. But we are all living in extra-ordinary times with the Buhari muddle at the centre. And the major problem here remains that the solution to the Buharian presidential pestilence is neither here nor there.

The Nigerian glamorous First Lady is in Dubai for months now reportedly enjoying herself in what her media handlers said was a medical check-up, nay tourism. Since September last year or thereabout Madam Buhari had left Nigeria for the UAE shortly after her daughter, Hanan, tied the nuptial knots with fiancée, Mohammed Turad. It was an opulent wedding with the high and mighty witnessing it in all pomp and pageantry.

According to credible reports online our first lady must have relocated discreetly following allegations of insecurity in Aso Rock in particular and Nigeria in general. Corroborating her assertion is an understatement. Nigeria has been overrun by criminals in high and low places who obtain guns as easy as we buy bread from the roadside!

The First Lady was involved in a bruising power struggle with the formidable cabal led by Mamman Daura inside the Aso Villa. It got to a head sometime last year when she and her children battled President Buhari’s Personal Assistant, Sabiu ‘Tunde’ Yusuf leading to a gun-fight. The President’s wife, children and her security details had forcefully tried to remove ‘Idiagbon’ from the Villa after he refused to embark on a 14-day isolation period upon returning from a trip to Lagos.

Mrs Buhari must have been frustrated by the way and manner the Kingibe-Daura-Gambari cabal inside the Aso Villa have effortlessly hijacked the Buhari presidency rendering her husband dumb and ineffective with the enomous powers the federal constitution invested in him. Again, she must have felt powerless in the scheme of things given her unsuccessful attempts to supplant the cabal with her own agenda.

Her husband, ever aloof and insensitive to the plight of Nigerians and the mounting security challenges, was not receptive ostensibly to her power-grab ideas hence her decision to quit, taking a break. Bringing her agenda to bear on the national leadership had not been an easy task.

Since President Buhari has been classified as a colossal failure by a good number of Nigerians at home and abroad Aisha may have opted to excuse herself from the potentially damning history of the Buhari regime post-2023. Having been schemed out by those close to Buhari the First Lady had protested publicly over her inability to help her underwhelming husband take effective control of his rudderless administration.

But come to think of it objectively Mrs Buhari could be said to be a stubborn wife and an overbearing woman of grace. President Buhari had said early enough in the life of his administration that her place was in the kitchen and the “other room”! That presidential statement could bear certain chauvinistic undertone yet the truth remains that Buhari is not good at pandering to the whims and caprices of the weaker sex.

But while the Adamawa-born beautiful woman seemed to have objected to such derogatory disposition by trying unsuccessfully to wrest some unconstitutional powers from the grip of the notorious cabal calling the shots on behalf of the President no inch of ground had ever been surrendered in order to accommodate her or her minions.

Whatever made her to bolt away electing to stay put in Dubai for so long may not be unconnected to her political ambition and her opposition to the gerontocratic order in the Aso Villa. Marking the golden jubilee birthday without the President officially acknowledging her or wishing her many happy returns must have sent wrong signals across the land.

Would Aisha go for broke upon her eventual return to Abuja by expressly demanding for a divorce? Would she stay strong in the self-imposed exile abroad as a way of protesting against the failures in the system? Would she return sooner or later to dispel the rumour of a malaise or abandonment of her matrimonial presidential home to spite her husband and his entrenched gang?

Whatever happens President Buhari appears unperturbed by her prolonged absence from the power scene. Of course, she is missing in action and we are missing her for her fiery criticisms and intrepid challenge of the executive shenanigans of the unelected ‘Buharideens’ in Abuja.

Besides, since Nigeria is fast unravelling with ubiquitous insecurity, banditry, kidnapping and terrorism (including the Fulani herdsmen conundrum) her absence from the homefront could ‘exonerate’ her when Buharism implodes and historians reach a conclusion on the potentially eight years of national leadership mediocrity.

We wish her sound health and many more years on earth as a responsible mother and wife of our incompetent President. Happy 50th birthday to Madam Aisha Buhari! Please return home soon even when we all know that the nation is on fire!!