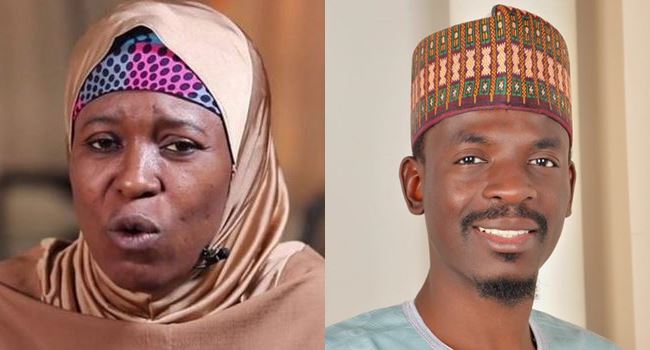 The co-convener of the “Bring Back Our Girls” movement, Aisha Yesufu and the Personal Assistant on New Media to the President, Bashir Ahmad, had angry exchanges on the micro-blogging platform, Twitter, over the former’s claim that President Muhammadu Buhari begged the former Minister of Education, Oby Ezekwesili, to be his running mate ahead of the 2011 election.

“Since we are in the era of saying it as it is. Godmother rejected Buhari’s appeal to be his running mate. Let it also be on record that Goodluck Ebele Jonathan wanted Dr. Oby Ezekwesili @obyezeks to be minister and she refused. The late President Yar’adua also offered her ministerial appointment and she turned it down.”

The tweet apparently did not sit well with Ahmad who went under the thread to respond:

“Saying it as it is, she also begged Nigerians to offer her the presidency. And, we REJECTED her.”

The presidential aide’s response triggered Yesufu’s anger and she fired back:

“This from the PA of someone who was rejected three times, even tied wrapper to beg for votes. Cried on National TV and was not able to secure his hometown after being voted into office. His people now pay tax to bandits. When was the last time Buhari dared to visit Daura?”

Not to be outdone, Ahmad responded:

The indefatigable activist seemed ready for Ahmad as she gave it back to him:

“She had the guts to say she didn’t want to serve you as your president. Buhari who has no life when he was not in the pay of government is already having palpitations over the less than three years he has to freeload. This time without Daura who are waiting to stone him for his failure.”