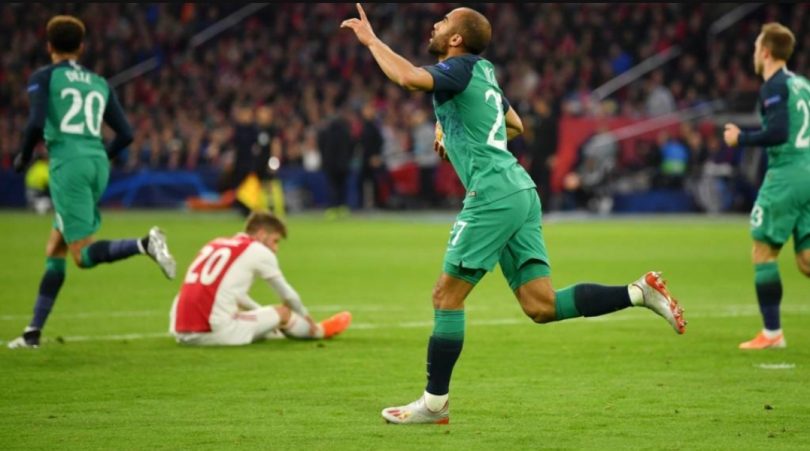 Lucas Moura scored three goals to help Spurs come from two-goals down against Ajax to reach the final of the Champions League.

Spurs, who were trailing 1-0 from the first leg at home, defeated the Netherlands giant 3-2 to win the semifinal tie on away goals.

The Premier League side made the worst possible start in Amsterdam when a 5th-minute opener and another 35th-minute goal put Ajax 3-0 up on Aggregate.

But captain Matthijs de Ligt and Hakim Ziyech’s first-half goals were stunned by a second-half hat-trick by Moura, with the final goal coming in added time to inflict a heartbreak on the hosts.

“Impossible to explain what I’m feeling. I’m very happy and very proud of my team-mates,” Moura said after the unbelievable night.

Read Also: UCL: To lose like this is inexcusable, all I can do is apologise – Valverde

With the victory, Tottenham set up an all-English Champions League final clash with Liverpool, billed to hold in Madrid on June 1st.

Speaking after the game, Spurs manager, Mauricio Pochettino said: “It’s difficult to compete at this level. I am so grateful to be a coach.

“To be in football and to live this type of football.

“They are all heroes but [Lucas Moura] was a superhero. From the first to last one – the tough moment to live in the five years before.

“Thank you to everyone who has believed in us. To describe this in words is difficult.”