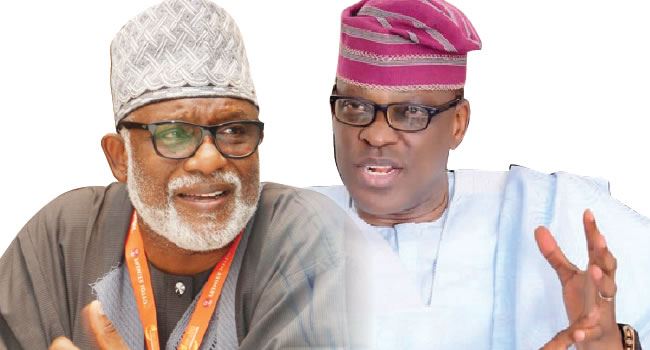 The Governor of Ondo State, Rotimi Akeredolu and the candidate of the Peoples Democratic Party (PDP), Eyitayo Jegede, have been trading words over a clash by party members which occurred on Tuesday, at the inaugural sitting of the Election Petition Tribunal in Akure.

Jegede had filed a petition challenging the victory of Akeredolu who was declared the winner of the October 10 governorship election by the Independent National Electoral Commission (INEC).

At the sitting of the tribunal, party members of both parties clashed and had reportedly engaged each other in a free for all fight with guns, machetes, bottles and other forms of dangerous weapons employed, leading to many people, including Jegede, injured in the process.

In a reaction to the attack, Jegede and the PDP accused Akeredolu of mobilizing thugs to the venue of the tribunal to harass and attack their supporters and members.

In a statement, the state PDP Publicity Secretary, Kennedy Peretei, accused Akeredolu of importing thugs, suspected to be members of the National Union of Road Transport Workers (NURTW), to attack the PDP members.

“At the hearing on Tuesday, 8th December, 2020, APC thugs, under the leadership of one Chemical, bombarded the venue, harassing, molesting, beating up and shooting sporadically into the air and attacking anyone perceived to be a supporter of the PDP and its candidate, Eyitayo Jegede.

“One of our chieftains, Sunday Oladunmoye, is still receiving treatment from machete cuts he sustained from this group of thugs.

“They were parading the vicinity of the court in a tinted Toyota Corolla car. Others were members of the Taxi Unit of NURTW, with instructions from their master, one Idajo, to cause pandemonium during the sitting.

“As early as 8.30am, the petitioners, Jegede and the PDP represented by its Chairman, Alhaji Fatai Adams, led other PDP leaders to the court.

“But shortly thereafter, the APC thugs caused panic and confusion within the arena. It took the combined efforts of the Army and Policemen to restore order.

“The PDP wishes to call on security agencies to live up to this fresh threat to law and order in the state. Resorting to violence will not deter the PDP and its candidate from pursuing this petition to its conclusive end. Neither can this act of barbarism scare the Judges from the course of justice.” However, Akeredolu and the All Progressives Congress (APC), have debunked the claims by Jegede and the PDP, saying that the ruling party had no reason to invite thugs to invade the tribunal venue.

But the APC Publicity Secretary, Alex Kalejaye, said contrary to the claims by the PDP, “it was the desperation of the opposition party to smear the image of the APC that made them resort to such spurious claims.”

“Contrary to the unreasonable desperation of the PDP to smear the image of APC in Ondo State, and its candidate, Mr. Akeredolu, the ruling party has no reason to mobilize thugs to the venue of the governorship tribunal, sitting in Akure.

“The APC in Ondo State parades unequalled disposition to peaceful conducts and approaches to issues, and therefore would not promote nor condone thuggery for whatever gains.

“Like other stakeholders in the election petition tribunal, APC stalwarts, in their most decent and dignified manners, arrived early at the court, to listen to the proceedings.

“We learned, with dismay, avoidable rowdiness among people that were struggling to enter the court premises. To the best of our knowledge, the desperation gave room for the clash.

“We are of the strong opinion that political parties and other stakeholders should caution their sympathisers against unruly display throughout the legal process, rather than holding APC responsible for such indecent and aggressive attitude.

“We wish to affirm our confidence in the tribunal to dispense justice, and would therefore have no reason to encourage violent disposition, under whatever guise.”

Nigeria to engage US on religious freedom violations —Foreign ministry