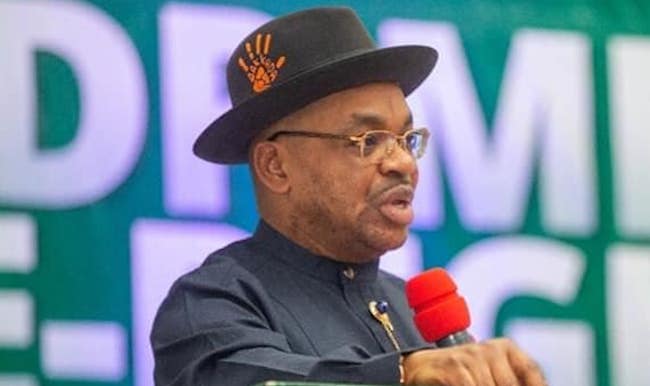 Last weekend, Inyangeyen declared his intention to contest for the PDP ticket for the senatorial district, a move believed to be against the governor’s wish.

Governor Emmanuel had reportedly conceded to a plan by the party to zone the senatorial ticket of the district to Ikot Abasi Federal Constituency, instead of Eket federal constituency, where both the governor and the COS hail from.

Inyangeyen is however against the zoning arrangement. He argued that the arrangement has denied the Senatorial district of good representation in the Senate.

While declaring his Senatorial ambition in his ward in Onna, Inyangeyen challenged others interested in the ticket to test their popularity instead of taking the easy route of zoning

“It is my position that everything henceforth be based on competence and credibility. Let all those who seek that office test their popularity in the field.

“Everybody in Eket Senatorial District feels the same level of sadness over the kind of representation the senatorial district has witnessed in the past 15 years.

“Any patriotic son or daughter of the senatorial district should be bothered. Hence my decision to commit my capacity to the kind of change I envision,” He said.

Meanwhile, Inyangeyen has been sacked, but it was not stateed that he was sacked for presumably going against the governor’s wish.
The Secretary to State Government (SSG), Dr. Emmanuel Ekuwem, announced Inyangeyen’s sack in a letter dated 22nd February, 2022, and made available to newsmen in Uyo, the state capital.

It was stated in the letter that Inyangeyen lacks the skill sets and competence to help the state achieve economic development.

The letter reads: “On behalf of His Excellency, the Governor, government and the good people of Akwa Ibom State, I write to convey to you, the Governor’s profound appreciation of the worthy contributions you made to the development of our dear State while you served as Chief of Staff to the Governor.

“However, given the urgent need to match skill set and competencies to the task of maintaining the momentum of economic development in peace, your services are no longer required and you are hereby relieved of your position, as Chief of Staff ( CoS) to His Excellency, the Governor with immediate effect.

“You are therefore directed to handover all property of government in your possession, to the Secretary to State Government.

“Please, accept the assurances of His Excellency, the Governor’s goodwill and highest regards as you proceed to other endeavours”

Kwankwaso, Dalung, others form The National Movement ahead of 2023 elections