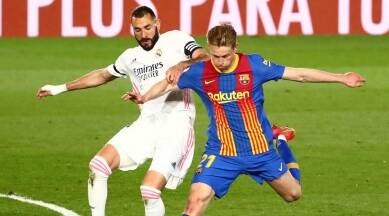 Sergio Aguero scored his first goal for Barcelona since his arrival at the start of the season, but it was not enough as the team were beaten by rivals Real Madrid.

Aguero scored in added time to half the deficit as Madrid had already scored two goals and cruising to victory at the Camp Nou clash.

It was a new-look El Clasico, with former Barcelona star Lionel Messi and Real legend Sergio Ramos no longer in the picture, as they have both joined Paris St-Germain in the summer.

David Alaba started and finished a counter attack for Real’s first goal, and Lucas Vazquez got a second in the 93rd minute.

Aguero then scored his first Barca goal but it was almost the last kick of the game.

Barcelona, in front of over 86,000 fans, put in a limp performance – with Real keeper Thibaut Courtois only making one save all afternoon

The Ronald Koeman side remain eighth in La Liga, as close to 14th-placed Elche as new leaders Real.

Koeman becomes only the second manager to lose his first three Clasicos as Barcelona boss – after Irishman Patrick O’Connell, who lost four between 1935 and 1940.