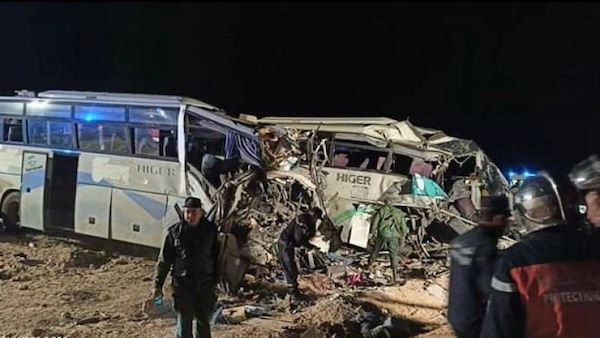 A tragic scene played out in the southeastern part of Algeria, when two buses crashed into each other in the El Oued Province’s Still village, claiming the lives of 12 people and injuring 46 other victims in the process.

The Algerian Civil Defense said that five of the injured victims involved in the auto crash were in critical condition and have been transferred from Al Mughair Hospital to El Oued Hospital to receive better medical treatment after the ghastly auto accident which took place at 1 am (local time).

According to an official based in El Oued Province, Emergency teams arrived at 1:10 am (0010 GMT) following a fatal accident, a collision between two buses, on the state highway near the city of Astil” in the province of Biskra, 500 km southeast of Algiers.

Public radio quoted Ahmed Baoudji, director of emergency services for the nearby city of El Oued, as saying preliminary investigations indicated speeding was the probable cause of the latest tragedy of its kind in the North African country.