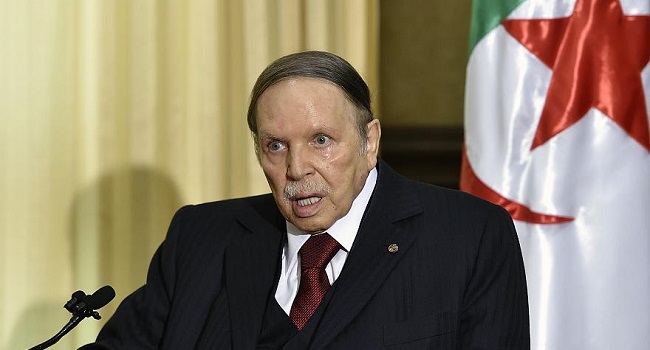 Like their fellow colleagues who held similar protests across Algeria a week ago, the students in Algiers on Tuesday flooded the streets in a peaceful protest against 82-year-old President Abdelaziz Bouteflika’s candidacy in the April 18 elections.

Bouteflika, who assumed office in 1999, gave his last public speech in 2012, a year before he had an incapacitating stroke that restricted him to a wheelchair.

On Tuesday, the young protesters chanted slogans against the ailing leader.

“Algeria has no master. Algeria is a free country,” read one banner.

A campaign was launched on Facebook which encouraged subscribers to reach out to the university hospital in Geneva, Switzerland, where Bouteflika has been receiving medical checks since February 24.

Meanwhile, on Sunday, Bouteflika’s campaign manager Abdelghani Zaalane, filed a paperwork to formalise the president’s candidacy. The move was described as illegal by legal experts.

Bouteflika’s reaction to the demonstrations was to vow to arrange a national conference that would set a date for new elections in which he would not contest but the proposal failed to appease the public who took to the streets the same night, followed by thousands more the following day.