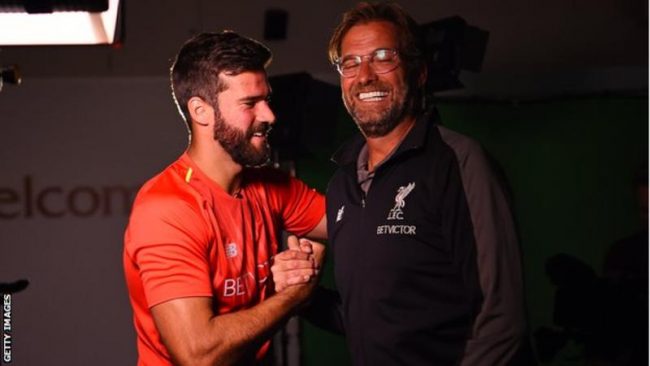 English Premier League club Liverpool have officially signed Brazilian goalkeeper Alisson from AS Roma in a deal said to be worth up to £66.8m.

The Brazil number one at the just-concluded FIFA World Cup in Russia hence becomes the world’s most expensive goalkeeper as the deal tops the 53m euros paid by Juventus to Parma for Gianluigi Buffon in 2001.

Alisson penned to stay at Anfield for six years, having been at Roma for two years, playing 37 Serie A games in 2017-18.

“In terms of my life and my career, it’s a huge step for me being part of this club and this family,” said the goalkeeper.

“I’m really happy to have the opportunity to play alongside him (Salah) again. As well as being a great player, he is a huge character and a great person – which is the most important thing,” Alisson added.

Liverpool manager Jurgen Klopp said he has signed “a real personality”, adding that “at one point in the last few weeks it came up, the opportunity to sign one of the world’s best goalkeepers. The owners were quite excited, so we did it.

“We got him here because of his existing strengths, which is in all goalkeeper departments the highest level.”

Alisson is Liverpool’s fourth major signing since the end the 2017-18 season.