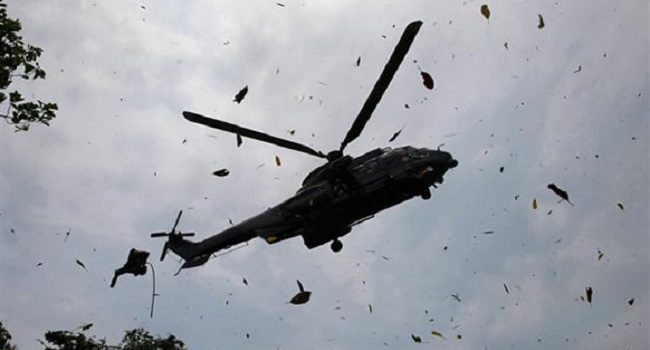 The Nigerian Airforce (NAF) has confirmed dead all the five crew members on board the Mi-35 helicopter gunship that was declared missing on Wednesday.

The fighting jet reportedly went missing at Damasak in Northern Borno State around 7:45 pm on Wednesday night while providing close air support to troops of 145 Battalion.

Two Pilots, two gunners and a flight technician were occupying the jet during an air operation against Boko Haram terrorists.

The NAF spokesman, Air Commodore Ibikunle Daramola, who earlier gave the notification of the missing jet, confirmed the death of the crew members today.

Daramola said the remains of the personnel have been recovered to Maiduguri, the Borno State capital.

Daramola said, “It is with a heavy heart that I announce the death of the 5 crew members who were on board the Nigerian Air Force (NAF) Mi-35M Helicopter which crashed in combat yesterday (Wednesday), 2 January 2019, while providing close air support to troops of 145 Battalion, Damasak in Borno State.

“The deceased personnel’ remains have been recovered to Maiduguri.

“These gallant fallen heroes paid the supreme sacrifice in the service of our Fatherland, for which the NAF, and indeed the entire Nation, owes them an unending debt of gratitude.

“The Chief of the Air Staff (CAS), Air Marshal Sadique Abubakar, on behalf all officers, airmen, airwomen and civilian staff of the NAF, commiserate with the families of the 5 fallen heroes and pray that the Almighty grants their souls peaceful repose.”