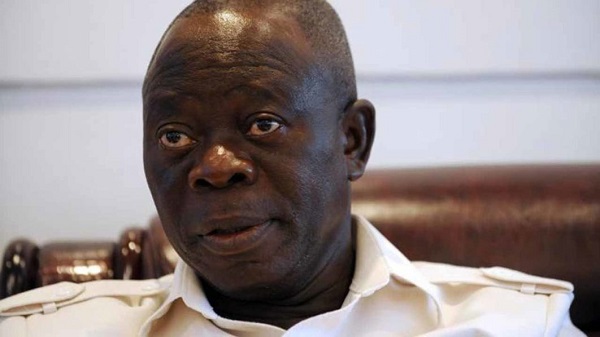 The National Chairman of the ruling All Progressives Congress (APC) Adams Oshiomhole may be feeling uneasy at the moment as a Federal High Court sitting in Abuja has resolved to determine whether or not to compel the Economic and Financial Crimes Commission (EFCC) to investigate and prosecute him over allegations of corruption.

Oshiomhole a former two-term governor of Edo State, will now know his fate on May 13, a date which the court has fixed to determine the suit filed against him by Edo State-based cleric and activist, Bishop Osadolor Ochei.

In the suit filed by Bishop Ochei, marked FHC/ABJ/CS/628/2018, the cleric prayed the court to declare that the EFCC has a statutory duty to investigate different petitions that contained allegations of financial impropriety leveled against the former Edo State governor.

Oshiomhole was accused in the petition of mismanagement and misappropriation of Edo state fund that culminated in procuring choice properties including mansions substantially expensive above his legitimate income as Governor of the State spanning November 12, 2008 to November 12, 2016.

Related Topics:Court mulls order seeking to compel EFCC to investigate Adams Oshiomole)Court to consider suit against Oshiomoleoshiomole
Up Next

CERTIFICATE OF RETURN: Okorocha on his own –APC