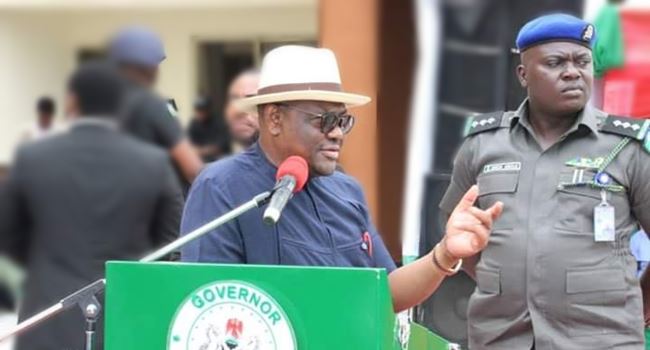 The governor of Rivers State, Nyesom Wike has said that Rotimi Amaechi and other political appointees, working with President Muhammadu Buhari’s government should be ashamed of themselves.

The governor stated this in response to the recent release of N148 billion for roads construction across the country.

According to him, such an amount was released and Rivers, one of the major oil-producing states in the country, was allegedly deliberately neglected.

Amaechi, Wike’s predecessor, is currently the Minister of Transportation, a position he also occupied in Buhari’s first term.

But Wike, who is angry that persons like him and others from the state, working with Buhari’s government, could not supposedly protect the interest of Rivers, said they should all be ashamed.

The governor spoke before commissioning the new Rivers State Civil Servants Quarters at Amassoma Street in Port Harcourt on Thursday.

“The Federal Government released N148bn for the construction of roads and it did not consider one Road in Rivers State. Look at the condition of the East-West Road.

“Shame on those who say they are working with the current Federal Government, but cannot protect the interest of Rivers State in that Government.

“You are there; you cannot even say for my sake help me and give me one Road. So I can go home and tell my people this is what I brought to Rivers State.

“What offence has Rivers State committed in this country that this Federal Government cannot for one day remember the state? They have our son who was their Director-General. If for nothing, since he was your Director-General, help him and do one project for his people.

“Tomorrow you will say Rivers people should vote for you. Which vote? We won’t do that. Nobody is a slave. We are not slaves. We cannot be conquered by anybody,” Wike said.