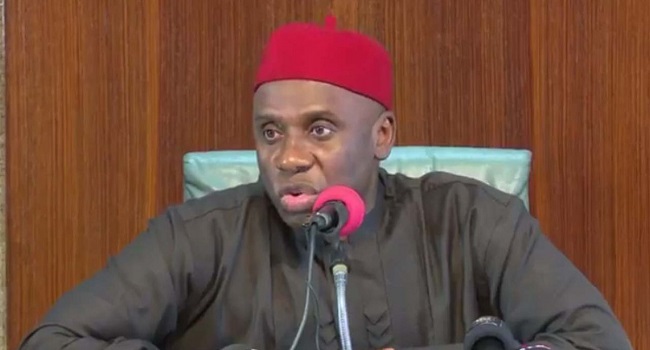 The Minister of Transportation, Rotimi Amaechi, has revealed that the non-approval of the $5.3bn from the Chinese government is what is stalling the execution of the Ibadan-Kano rail project.

Amaechi, who appeared on the television programme, NTA Weekend Deal in Abuja on Saturday, January 9, explained that once the loan is approved, the project will take off immediately.

The former Rivers State Governor admitted that to complete all planned rail projects, the Federal Government has to rely on loans sourced from the Chinese government and their banks, and where a project take-off is delayed, it means the loan has not been approved.

Amaechi added that though the Federal Government had long given its approval for the contract, some investors who showed interest in helping Nigeria have suddenly developed cold feet.

While answering a question on what could be delaying the take-off of the long awaited Ibadan-Kano rail project, Amaechi said:

“We are waiting for the Chinese government and bank to approve the $5.3 billion to construct the Ibadan-Kano. What was approved a year ago was the contract.

“The moment I announced that the Federal Government has awarded a contract of $5.3 billion to China Civil Engineering Construction Corporation (CCECC) to construct the Ibadan-Kano rail line, they assume the money has come in, no.

“Up to now, we have not gotten the money a year after we applied for the loan. We have almost finished the one of Lagos-Ibadan. If we don’t get the loan now, we can’t commence.”

Amaechi said the Ibadan-Kano rail would link six areas which span Kaduna-Kano-Abuja-Minna-Ilorin-Oshogbo-Ibadan where cargoes could be moved to Kano from Lagos, adding that the causes of frequent accidents stemming from wet cargoes would be addressed once the rail line becomes functional.

“When the Ibadan to Kano rail project is completed, wet and dry cargoes can be transported from Lagos to Kano.

“Nigerians should be more patient with the Ministry of Transportation over the issue of wet cargoes. Currently, we are trying to construct the railway into the seaports to enable us transport either wet or dry cargoes to various destinations. The only wet cargo that can go now is between Lagos to Ibadan.

Related Topics:AmaechiIbadan-Kano rail
Up Next