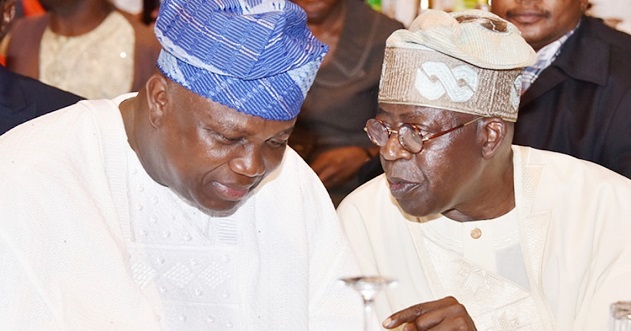 After two postponements, the All Progressives Congress (APC) Party’s Governorship Primary will hopefully hold at least, in Lagos today, October 2. The Godfather of Lagos APC politics, if you are truly partisan, you can delete APC and say Asiwaju Bola Tinubu – effectively dominates all of Lagos politically, and has publicly declared that whereas the incumbent Governor Akinwunmi Ambode wants a second term in office, he, the Godfather and the party leaders no longer want him. Ambode’s crime as stated, for more than two weeks is that he has refused to carry relevant stakeholders “along”, whatever that means. The godfather changed the narrative on Sunday when he disclosed that Ambode’s crime is that he failed to implement a “blueprint” for the development of the state. Ambode is fighting back. He called a World Press Conference and called Babajide Sanwo-Olu, the consensus candidate who has been handpicked to replace him, names.

When this crisis occurred, Ambode who was brought to power by Asiwaju Bola Ahmed Tinubu begged his godfather and benefactor. He was ignored. Ambode’s wife also went before the grandmaster of APC politics in Lagos State. She was treated politely and dismissed. Sanwo-olu has the support of 36 members of the State House of Assembly, all local Government chairmen and chairmen of Local Development Council Areas, party leaders, and Lagos APC members in the National Assembly. Ambode has only the support of local councilors and a segment of public opinion. From the look of things, Ambode as they say, is a “goner”.

But that is not the story. The story is that after all the begging and genuflection, Ambode is now standing up for a fight. On Sunday at a World Press Conference, he pulled off his gloves and resolved to engage in a bare-knuckle fight. He accused his opponent, the Asiwaju camp’s candidate of fraud, incompetence and incapability. Sanwo-Olu has refused to respond in like directly, except may be through proxies, knowing clearly that he still serves in the government of the same man whose office he wants to take. If Sanwo-Olu is so bad, why is Ambode still retaining him as Managing Director of the Lagos State Development and Property Corporation (LSDPC)? But of course, the fight is not between the two of them, it is between Ambode and Tinubu. Tinubu accuses him of abandoning a blueprint. Who are the authors of that blueprint? Is it a constitutional matter that a Governor must be held hostage by a document prepared long before he assumed office? What is the content of that blueprint, if the rest of us may ask?

I like the fight between Godfather and Godson. There will be no winners at the end of the day. There will only be losers on both sides. One, the Ambode saga has already exposed Asiwaju Bola Tinubu’s vulnerability. His political legacy is at stake. Ambode, having been pushed to the wall has become the underdog who is ready to shake the table. He has pushed the table. Two, Ambode is fighting the battle of his political life. If he defeats Tinubu, he would have re-made himself into a political force. If he loses, he would still have succeeded in exposing the evil of the Godfather syndrome in Nigerian politics. His travails may end up turning him into a hero. Three: nobody is talking about us: we the people, in this entire equation. We know that. Four, whatever happens in Lagos has implications for President Muhammadu Buhari’s fortune in the general elections of 2019.