AMERICA DECIDES: Biden in the lead against Trump in divisive US election | Ripples Nigeria 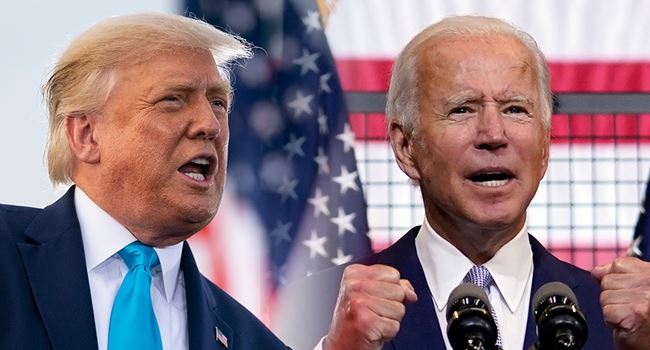 The results from the ongoing US election continue to trickle in with US media projecting wins for the Republican incumbent, Donald Trump, so far in 19 states including Indiana, Kentucky, Missouri, Ohio and Tennessee — all states he won in 2016.

Joe Biden on his part has captured 17 states including his home state Delaware and big-prized California and New York, as well as the US capital. As with Trump, so far, all states claimed by Biden were won by Democrat Hillary Clinton in 2016.

Thus far, the figures polled in the ongoing election gives Biden 213 electoral votes and Trump a maximum of 138, because Nebraska splits its electoral votes based on congressional districts.

Meanwhile, Trump’s campaign team and Nevada Republicans are asking a state court judge to extend voting by one hour at 22 Las Vegas-area polling locations, according to the Associated Press and Nevada Independent newspaper

.An Election Day lawsuit filed in Clark County claims the 22 voting locations did not open on time. It was getting an immediate hearing before Judge Joe Hardy.

“If immediate action is not taken, appellants will never have the opportunity to vindicate their rights,” attorneys for the two groups wrote in the filing. “More troubling, Nevadans – and the rest of the country – will be left wondering whether the results of the election are legitimate.”

Below are the projections of US media including CNN, Fox News, MSNBC/NBC News, ABC, CBS and The New York Times based on states won by each candidate and the corresponding number of electoral votes.