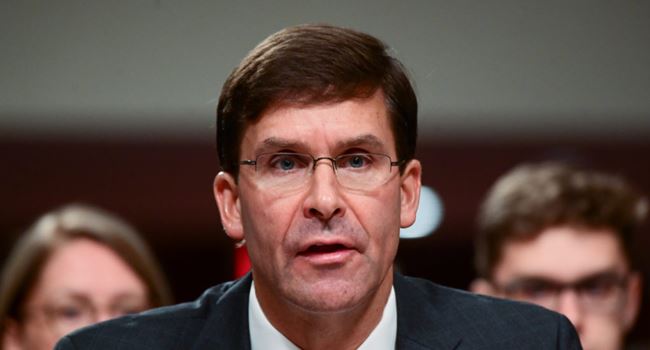 The Defense Secretary of the United State of America, Mark Esper, has told all who care to listen, that the US is not going to pull out of Iraq militarily following reports of a US military letter about preparations for a withdrawal.

Esper who revealed this late on Monday while briefing Pentagon reporters said that there have been no official plans issued to prepare to leave Iraq following rising tension between the US and Iran.

“There’s been no decision whatsoever to leave Iraq,” Esper said, when asked about the letter, adding there had also been no plans issued to prepare to leave.

“There’s been no decision made to leave Iraq. Period,” he told reporters.

The comments by the US Defense Secretary comes a day after the Foreign Minister of Iran, Mohammad Javad Zarif called for the expulsion of the US from the Middle East following last Friday’s attack which witnessed the killing of Qassem Soleimani, the head of Iran’s elite Quds Force.

Zaif who said this on Monday while speaking at the funeral procession of the top Iranian military commander also urged US President Donald Trump to distance himself from his advisers who seek confrontation with Iran.

“Do you still want to listen to the clowns advising you on our region?” he wrote on his Twitter page. “And do you still imagine you can break the will of this great nation?”

Related Topics:AmericaIraqUS military
Up Next