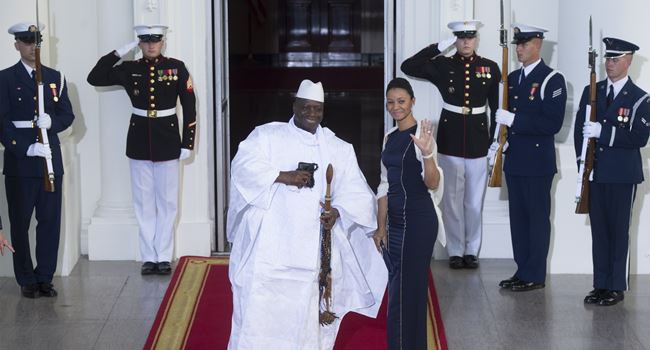 Two weeks ago, new allegations were added to a litany of human rights abuses that have been levied against the former president of The Gambia, Yahya Jammeh. The exiled former leader, who once infamously claimed that he could cure AIDS with his own secret herbal mixture and spiritual healing techniques has been accused of sexually abusing at least three women at the height of his power.

Jammeh ruled The Gambia with a totalitarian grip for 22 years after seizing power in an army coup in 1994. After he suffered a shock defeat in the 2016 presidential election, he refused to relinquish power. It was only after regional troops mobilised troops on The Gambian border that he fled to Equatorial Guinea. He’s still there.

Since then, allegations of torture, enforced disappearances, freedom of speech violations, and suspicious deaths in government custody have emerged. To get to the bottom of the allegations hearings are being carried out by a Truth, Reconciliation, and Reparations Commission set up by the new government.

Under the slogan, “never again”, the Commission has the job of creating an impartial historical record of violations of human rights that took place under Jammeh’s regime. It is hoped that process achieves a number of objectives. These include promoting healing and reconciliation, addressing the impunity of previous members of government, establishing the fate of disappeared victims, allowing victims to tell their account of violations, and to grant reparations where appropriate.

So far, the public has heard from current and former members of armed forces over an alleged counter-coup plot against Jammeh early in his rule. The testimony of those soldiers has been horrific. But even if more victims come forward and speak out, and more human rights violations are revealed during future testimony from both victims and abusers, pursuing legal consequences against Jammeh is likely to prove very difficult, if not impossible.

The problem is one that those pursuing justice against former dictators and human rights abusers have encountered before. After Jammeh lost power, he fled to Equitorial Guinea with the equivalent of more than $1 billion from public funds. Equitorial Guinea is not a signatory to the Rome Statute and therefore has no obligation to return him to The Gambia to face justice. This has left Jammeh’s fate in the hands of the country’s President Teodoro Obiang, a close friend and ally.

In one incident an alleged member of the counter-coup was arrested, beaten, stripped naked, shot and stabbed with bayonets. It was then discovered that his body was too tall for the grave that had been dug, so one of the executioners chopped off his legs with an axe.

Three women so far have levied accusations of sexual violence against Jammeh. Two have remained anonymous while one – Fatou “Toufah” Jallow – has agreed to come forward publicly. She is expected to give testimony to the Commission later in the year.

In graphic detail, Toufah explained to Human Rights Watch how she became a target of the president’s unwanted attentions when, at the age of 18, she won a state-sponsored beauty pageant. As part of her duties as a beauty queen, she was called to a meeting with Jammeh, who began to shower her with presents and money. After a sexual attack in the presidential residence, and fears for her future safety, she disguised herself in a burka and fled across the border to Senegal.

Two other women have also made allegations to Human Rights Watch, but they have chosen to remain anonymous. Marion Volkmann-Brandau, the researcher who exposed these allegations, believes that there were many more victims.

Toufah has said that she hopes her revelations encourage other victims to come forward and share their stories. Her plea has been echoed by the Attorney General who has praised her actions and asked others to speak out.

The Truth and Reconciliation Commission has not yet examined any allegations of sexual violence. These hearings are due to take place later in the year.

Pursuing legal consequences against Jammeh is likely to prove very difficult, if not impossible. One reason for this is that the Truth and Reconciliation Commission does not have the power to prosecute Jammeh, or any other individual for human rights abuses. It’s powers are limited to recommending that the Attorney General acts on cases that can be taken before the courts.

Even if cases are brought, the Gambian government would have to extradite Jammeh from Equatorial Guinea to face trial. Initially, there were hopes that Obiang, who himself has been accused of numerous human rights atrocities, might feel political pressure to return Jammeh to The Gambia to face his accusers. But a recent video of the two celebrating New Year together extinguished those hopes.

At least in the short term, it looks unlikely that Jammeh will face either his victims or consequences for human rights abuses.