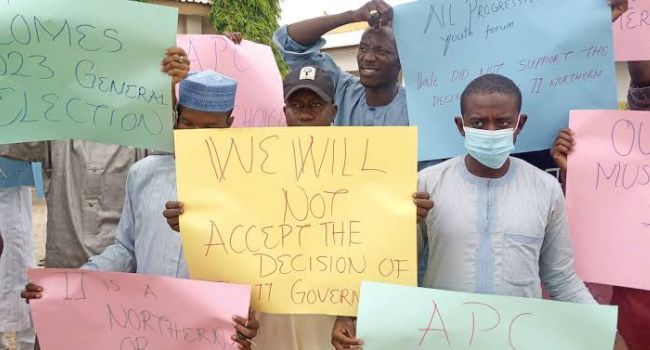 Northern governors, according to a coalition of youth groups in the ruling All Progressives Congress (APC) have done little to improve their respective states, causing the region to suffer unimaginable suffering.

The organizations, which are affiliated with the APC Progressives Youth Elements and the APC North East Youth Forum, made the accusation on Monday while opposing the eleven northern governors’ decision to shift power to the south.

Addressing journalists during a protest held in Bauchi, Chairman of the APC Progressives Youth Elements, Al-Amin Mai’Auduga, stressed that the Northern governors did not consult wider before reaching the decision they announced on Saturday.

Banditry, kidnapping, robbery, poverty, unemployment, and other societal vices, they claim, have resulted from the governors’ failure.

Youths holding placards with varied slogans stated that authority should not be handed to the southern part of the country.

They also revealed that the northern governors were self-centered in their positions, even if the north, in their opinion, was left behind in the grand scheme of things.

“It’s North or Nothing,” “we are not in support of power shift to the south,” “we will not accept the choice of 11 governors,” and “it’s their selfish interest,” were among inscriptions on their posters.

According to the youths, if the APC wants to stay in power beyond 2023, it must enable a northern candidate to emerge in order to compete with the opposition Peoples Democratic Party’s nominee, former Vice President Atiku Abubakar.

Mai’Auduga said, ““We, the Northern youths do not think it is time for any southerner to assume the mantle of power. We are not in support of the decision (of the northern governors) because it is against our political wish for 2023. The Northern Governors just sat down and took the decision for the entire people of the North. They are on their own.

“It is in their selfish interest, the Northern youths who are about 70 percent of the total population of the country are saying no. We are calling on our able National Chairman, Abdullahi Adamu to weigh into this and find a lasting solution to this. We are not going to support any southern candidate.

“These 11 governors that made the decision are not the only people in the North. They are doing it on their own selfish interests.”

Ibrahim Abdullahi, the leader of the APC Youth Forum, also spoke out, alleging that the governors chose this option to benefit from being nominated as vice president.

With the region’s hunger, insecurity, and poverty, he regretted the necessity to preserve power for progress.