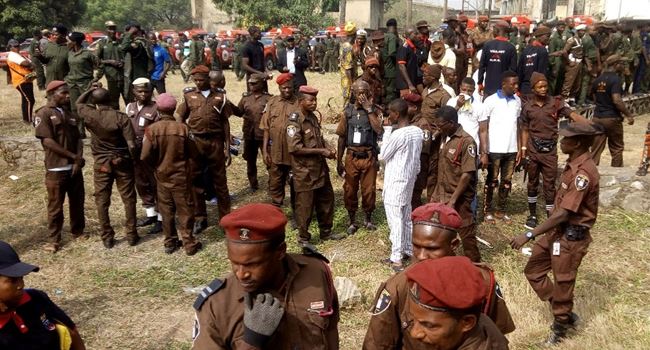 The Corps Commander, Brig. Gen. Joe Komolafe (retd), who disclosed this to journalists in Ado-Ekiti, said the suspects were arrested during a routine patrol in Eda Oniyo, Ilejemeje local government area of the state.

He said: “Our men on routine patrol intercepted these four persons suspected to be kidnappers on Friday morning when they were making their ways into the state from Sokoto State.

“They told us they were coming from Ilorin, Kwara State, on motorcycles after they were brought in from Sokoto State in a truck a few days ago. Upon questioning, they said they were heading to Akungba Akoko in Ondo State but with no clear mission here.

“What we found on them clearly gave them away as suspected kidnappers and also with their confession. One of them clearly wrote on his motorcycle in Hausa language, ‘Duniya Ba Hutu’ which means, No peace in this world.

“None of the motorcycles had number plate or documents to show ownership.”

Komolafe added that the suspects upon interrogation did not give a satisfactory response on their mission in the state but confessed to be “professional kidnappers.”

He said the suspects would be handed over to the police for further investigation.