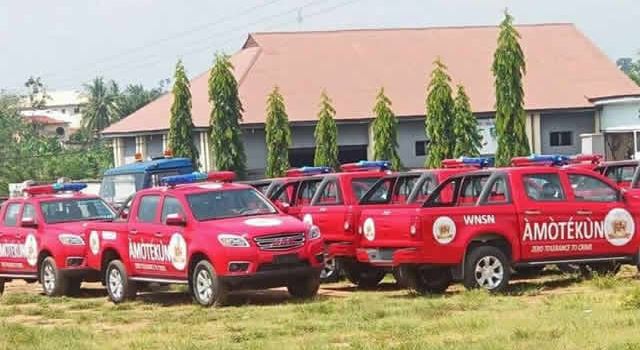 The suspects were arrested after abducting a well-known business man, Mr Kunle Agbayewa at a popular saw-mill in Idoani, Ose Local Government Area of the state, on Wednesday.

An eyewitness, Comfort Ilesanmi, disclosed that “the herdsmen. (kidnappers) entered the sawmill and kidnapped him immediately but people around quickly raised the alarm and the Amotekun personnel were invited to the scene”

The security outfit also confirmed that Mr Agbayewa was rescued after he was abducted by the suspected kidnappers while noting that they had been handed over to the state police command.

Commander of Amotekun Corps in the state, Adetunji Adeleye said the three kidnappers were apprehended and handed over to the men of the state police command for further investigation and prosecution.

“Our men (Amotekun Corps) led the police and soldiers to rescue the victim this morning shortly after we heard the news of his kidnap.

“After foiling their kidnap plot, we arrested the three men before handing them over to the police. They have begun giving confessional statements”, he said.

Related Topics:AmotekunkidnappersondoOndo State
Up Next