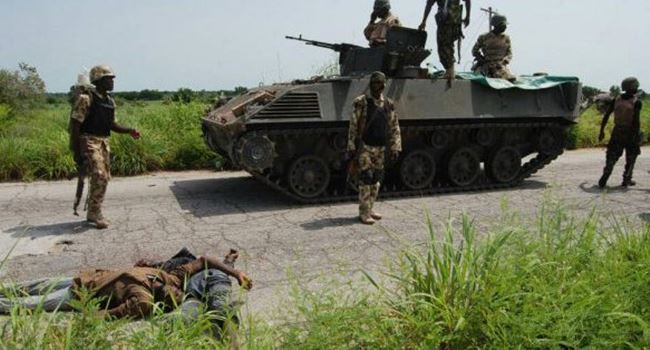 Nigerian Army on Tuesday announced that it has killed two Boko Haram terrorist that wanted to move into the Sambisa Forest from Gwoza-Dure Road in Borno State.

The Acting Director Army Public Relations, Col. Sagir Musa, who confirmed this in a statement, said the incident happened on Sunday as troops embarked on a fighting patrol under the newly inaugurated “Operation Hallaka Dodo’’ by the 7 Division, Maiduguri.

Read also: Group urges govt to mop up illegal firearms in Kogi ahead of governorship poll

The neutralized terrorists according to Musa attempted to move into their base in Sambisa forest with supplies meant for their colleagues.

Among the supplies he said were assorted drugs and medicines.

Noting that the situation within the general area of the Division was calm, Musa added that the Operation Hallaka Dodo was being conducted by all Brigades and Battalions in their areas of responsibility.