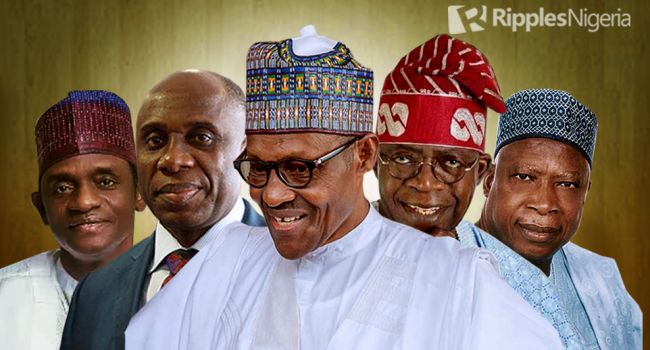 The All Progressive Congress (APC) emerged in 2013 as a coalition of politicians with varying ideologies, conflicting interests, and heterogeneous background, all unified by the singular objective of sacking the Peoples Democratic Party (PDP) from power.

The merger involved Asiwaju Bola Tinubu’s Action Congress of Nigeria (ACN) the Congress for Progressive Change (CPC), headed by former military ruler, General Muhammadu Buhari (retd.), the All Nigeria People’s Party (ANPP) and the All Progressive Grand Alliance (APGA). It was later joined by aggrieved members of the PDP, who had formed a group christened New-PDP.

The APC would go on to achieve its major goal of sacking the ruling party in a landslide victory in the 2015 general election. Apart from sacking an over-confident Goodluck Jonathan as President, the party also snatched some states from the PDP.

After over six years in power, the APC has not shown clear distinction from the PDP, from whom the former claimed to have rescued Nigeria. The APC Caretaker Chairman, Governor Mai Mala Buni of Yobe State, recently claimed that the party was now the largest political party in the whole of Africa with about 41 million registered members across Nigeria, a boast the PDP also made before it was booted out of power.

Yet, the party is not as popular and accepted as it was when it came with its gospel of change pre-2015 election. Few days ago, Governor Douye Diri of Bayelsa state argued that only PDP can rescue Nigeria from APC.

The APC is definitely desirous of maintaining its position as the ruling party, hence it is approaching the next general election combat-ready. Even though the electoral umpire is yet to finalise the tracks for the electoral contests in 2023, the ruling party would leave no stone unturned in the presidential, governorship, and even legislative elections.

Meanwhile, there are some key political gladiators in the APC whose actions and interests would influence the fortunes of the party. Who are these men, and how can they influence the destiny of APC ahead of 2023?

Buhari often projects himself as a refined democrat, who would not interfere in democratic processes, but he has been caught countless times overstepping his constitutional boundaries with impunity.

The National Assembly is considered a rubber stamp because the principal officers were handpicked by Buhari. A former Inspector General of Police overstayed his tenure as President. President wanted it so.
He is unsurprisingly highly revered in the APC, as his interest is usually considered a majority stake in the party.

In fact, both leaders and ordinary members of the party watch out for his body language in order to be sure their individual and collective actions are in consonance with that of the party.

Former Governor of Imo State, Senator Rochas Okorocha, opined in 2020 that the APC was still surviving because of the respect the party stalwarts had for the president. Buhari may not be bigger than the APC, but he is just as big as the party.

When asked in an interview with Channels television, whether he had a preferred candidate for president or not, a confident Buhari responded in the affirmative but stated that he would not disclose the name so that the preferred successor is not murdered.

As far as his body language is still relevant in the decisions of the party, not to mention his expressed interests, Buhari would have a say in the destiny of APC before and during the general election.

Apart from his unbridled powers as President, he also has a cult-like follower-ship, especially in the Northeast and Northwest regions. Before the historic APC merger, Buhari never recorded less than 12 million votes in any election.

Even though many would argue that this cult-like followership had dwindled in the last few years due to what many consider his poor performance, this does not take away from his influence over the party’s affairs, and the direction he would want it to go.

He has as many friends as he has has enemies, and invokes diverse feelings among people. For some, he is the political game changer of all times, for others, he is just an ethnic jingoist whose popularity does not extend beyond the Southwest region. He has been called many names, kleptomania, godfather, over-ambitious, mentor-to-great-leaders; but an appellation that is not often disputed is that he is the acclaimed national leader of the APC.

On January 10, he declared his interest to contest the 2023 presidential election. In an aura of confidence, Tinubu stormed the Aso Rock Villa to inform the President that he, the kingmaker, wants to be king. Many support groups have since sprung up to pledge loyalty to him, extolling the former NADECO financier as the most deserving of the top political post.

Many have argued that Tinubu is not Buhari’s preferred candidate, especially when the latter refused to disclose the chosen one for fear that he may be eliminated. Buhari of all people should know that the Jagaban of Bogu cannot be unsafe especially when he is walking on Nigerian soil.

While his chances of getting the APC ticket is not guaranteed yet, his popularity and influence, particularly in the South-West region, is never in doubt. It was Tinubu who prevented a celebrated Governor Amosun from imposing a successor in Ogun state, by endorsing the politically naïve Dapo Abiodun.

Read also: ANALYSIS: Five top politicians who will shape the future of PDP ahead of 2023

It is Asiwaju who dictates who gets what in Nigeria’s centre of excellence, Lagos; it is believed that Akinwunmi Ambode could have secured a second term as Lagos state governor if Tinubu had wanted him to continue.

Buhari was a serial election loser, even with his 12 million cult-voters, until his alliance with Tinubu, among other opposition politicians in 2015. That alliance was what toppled the PDP from power even though it had boasted that it would remain in power for 60 years.

In September, 2021 when Tinubu was in London, suspected to be ill, he was visited by at least 30 politicians, including the President, senators, ministers and governors. Tinubu’s political sons, daughters, and emissaries are everywhere, occupying powerful political positions – Senators, governors, House of representatives, head of government agencies, among others.

Even if he will not eventually contest, he also cannot be sidelined, as he would make a mark in the party’s fortune in 2023. Tinubu’s camp is speculated to be supporting a former governor of Borno state, Ali Modu Sheriff for the party’s chairmanship position, ahead of the February 26 convention.

True reconciliation was one of the key promises of the Yobe State governor, Mala Buni, when he was appointed to lead the party in June 2020, following the dissolution of the party’s National Working Committee, chaired by Adams Oshiomhole. Since Oshiomhole was sacked, the storm seems calm in the APC. Buni’s caretaker committee has been able to douse tension in the party, while achieving some progress in pacifying aggrieved members.

The Buni-led caretaker committee is the new adjudicator among conflicting members in various states. The state congresses held by the party last year produced factional executive councils in many states, but last week the CECPC inaugurated those factions, presumably endorsed by the state governors.

Other factions anointed by senators or other godfathers were ditched by Buni’s CECPC.
He may not be a political heavyweight as a person, but his decisions as the head of the caretaker committee, at least before the February 26 convention will go a long way in shaping the future of the party, as he would also have a hand in choosing who leads the party as chairman.

Amaechi who also joined the APC from PDP, is believed to command a huge influence in the South-South region. He was the Director-General of President Buhari’s campaign in 2015 and 2019. His political adversaries often allege that he bankrolled the APC campaign with funds from Rivers State coffers in the 2015 general election.

Ameachi, who is the Minister of Transportation, is celebrated as one of the most performing ministers in President Buhari’s cabinet, especially for his effort in reviving the moribund rail sector. He is also rumoured to be the favorite to succeed the President.

On February 5, he was conferred with a traditional title of ‘Dan Amana’ meaning ‘the trusted one’ in Buhari’s hometown, Daura.
He is yet to publicly express his rumoured presidential ambition, and he is yet to express support for any of the people that have publicly declared interest.

Regardless, his influence as a minister, and popular politician in the South-South region would contribute to the fortunes of the party as the country approaches the next round of elections.

Adamu, who represents Nasarawa West in the Senate, decamped from the PDP to APC in 2014. Adamu was one of those who led the defunct nPDP bloc into the APC in the pre-2015 merger.

He was appointed by the Buni-led caretaker committee to lead the party’s reconciliation committee which met and attempted to pacify aggrieved members of the party across the country.

As the 2023 election draws nearer, Adamu is believed to be a heavyweight especially among the Northern caucus of the party. He recently expressed his distaste for zoning, on the premise that the act is unconstitutional.

Speaking at a media briefing last year, he said “Nowhere in the Nigerian constitution does it say we should zone any public office. There is federal character, but not that parties must zone positions for presidency during election.
“Yes, somebody is saying the east has not had a president, I agree, and I sympathize. But the constitution says you can only become President through the ballot box.”