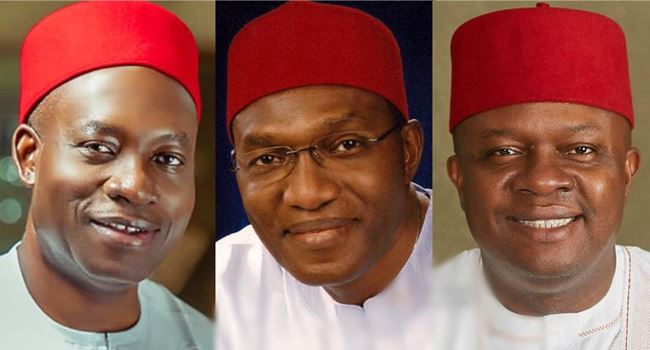 The battle for the governorship position in Anambra State is set to end in a fascinating climax due to the supplementary elections scheduled for today (Tuesday) in the Ihiala Local Government Area.

Ripples Nigeria had reported that due to the non-arrival of election materials and irregularities, the poll could not be conducted in Ihiala on Saturday. It was later extended to Sunday but the supplementary election was eventually scheduled for today.

“Based on constitutional consideration and provisions of the Electoral Act as well as the Revised Regulations and Guidelines for the Conduct of Elections issued by the commission , supplementary election is indicated for Ihiala Local Government Area,” the state returning officer, Mrs Florence Obi said during a press conference in Awka on Sunday.

She said the constitution provides for a candidate to secure both the highest number of votes cast and 25 per cent of votes cast in at least two-thirds of the local government areas of the state before he is declared the winner.

“Therefore, it is important to complete the election in Ihiala to make this determination,” she said.

From the results of the announced 20 LGAs, the candidate of the All Progressives Grand Alliance (APGA) Chukwuma Soludo is currently in the lead with 103,946 votes, more than twice that of his closest opponent, the Peoples Democratic Party’s (PDP’s) Valentine Ozigbo who got 51,322 votes.

Other top contenders in the election are Senator Andy Uba of the All Progressives Congress (APC) and Senator Ifeanyi Ubah of the Young Progressive Party (YPP).

Nonetheless, there are fears that the elections might be declared inconclusive, effectively disenfranchising the Ihiala LGA with 148,407 registered voters on INEC’s list.

As it is, depending on the outcome of the Ihiala election, either Ozigbo or Uba can overtake Soludo because 148,407 potential votes are available, that is, if every registered voter in Ihiala LGA comes out to vote.

There was no election in Oba Ward 1, Oba Ward II, and Akukwu Ward, all in Idemili South LGA, which have no fewer than 40,000 registered voters.

Also, INEC was meeting to decide whether or not to accept the Orumba North LGA result, which the collation officer claimed he signed under duress. the council has 93,620 registered voters.

In the eventuality of either overtaking Soludo, this raises the possibility of a run-off between Ozigbo and Soludo since neither APC nor PDP has met the spread of at least 25 per cent of votes in 14 local councils, which constitutes two-thirds of the 21 local councils.

But is that going to happen? Can Ihiala swing the tide?

Fast forward to the 2013 elections which had 111,531 registered voters in Ihiala but the total votes cast was 24,203 which resulted in an APGA victory that polled 10,274 votes. PDP came second with 5,520 votes while APC came third with 4,087 votes. The election brought in Willie Obiano (APGA) as governor.

In the 2017 governorship election in Anambra, a total of 124,588 voters were registered in Ihiala. In the final results, APGA won the LGA again, after polling 14,379 votes. APC came second with 7,894 votes while PDP followed next with 4,706 votes.

Considering this precedent, voters’ apathy is very rife in Ihiala LGA which might eventually favour a possible APGA victory again, ushering in Soludo as the Governor-Elect of Anambra State.

Furthermore, the trend in the past three elections has been an APGA victory in Ihiala LGA and the widespread appeal of Soludo — if the already-announced results are anything to go by — will work in his favour.

Even if all Ihiala residents came out to vote, it is improbable for either Ozigbo or Uba to win because the votes will be shared amongst the 18 candidates thereby, lowering their margins for victory.

However, the Nigerian brand of politics is riddled with nuances and subplots which makes any permutation a foolhardy task.

That being said, the political fate of Anambra lies with the Ihiala people who must come out en masse in order to cast their votes for the betterment of the state.