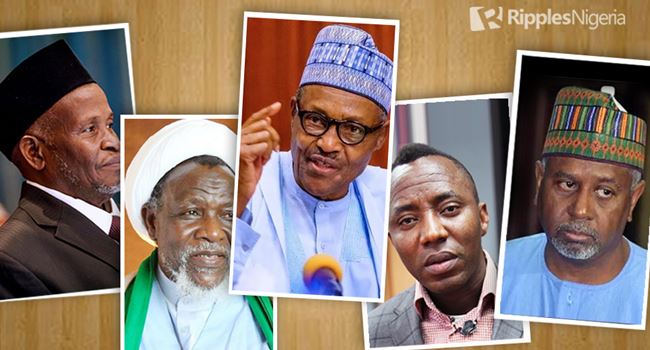 Nigeria is the most populous black nation in the world and has the largest economy in Africa. With independence gained in the year 1960, Nigeria has gone from one successive government to another, notably the uninterrupted democratic government enjoyed between 1999 till date.

Since the return of democracy, there have been core issues regarding governance in the country and chief among the issues are respect for human rights and respect for the established and set-up constitution of the country.

In this report, Olanrewaju Oyedeji takes a look at how disobedience of court orders by government authorities has weakened the rule of law and also threatens human rights in the country.

Chief among the agencies often found wanting in the disobedience of court orders is the Department of State Security (DSS) established on June 5, 1986. Before becoming the state security service, it was known as National Security Organization.

The security service is also a department of the Ministry of Defence.

After the incident, Mr El-Zakzaky and his wife Zeenah were detained on charges of murder. The Kaduna state government stated that during the incident that led to the massacre, a soldier, Corporal Yakuku Dankaduna, was killed.

However, in 2016, a federal high court ordered the release of El-Zakzaky and his wife while ordering payment of N50m to the Shiite leader and his wife for ‘violating their rights by being held in unlawful custody’. This pronouncement was made by Justice Gabriel Kolawole. The SSS however failed to obey this court order, the basis for such was that keeping El-Zakzaky was for his own safety.

It was not until after about five years of illegal detention that El-Zakzaky and his wife were acquitted  and discharged by the Kaduna state high court on 28th of July, 2021.

Another instance of disobedience of court orders was when Omoyele Sowore, a former presidential candidate and democracy activist, was held in  detention despite a November 6, 2019 bail order by an Abuja Federal High Court that the DSS should promptly release him.

The detention led to public outcry and condemnations. The state security service had charged Sowore for treason after planning a protest tagged “#RevolutionNow”. The police said it already deemed the planned protest an act of terrorism .

Mr Sowore and other organisers of ‘RevolutionNow’ movement also condemned the federal authorities for allegedly lying against them that the protest would be violent.

In Sowore’s case, the court had threatened to imprison the DSS Director General.

In a “notice of disobedience to order of court” issued by the court  and addressed to the DSS DG, the Federal High Court directed the boss of the secret police to comply with its directive or face grave consequences, which includes “commitment to prison”.

Amnesty International also reported that the Nigerian Attorney General defied an Abuja Federal High Court order to hand over the soldiers who were allegedly responsible for killing three policemen in Taraba state in August 2019.

Another prominent case of such disobedience had to do with the former National Security Adviser, Sambo Dasuki who was accused of diversion of $2.1 billion and illegal possession of fire arms.

Although Mr. Dasuki was granted bail on at least six different occasions by various courts, the Nigerian government persistently refused to comply with the court orders.

After over four years in detention, Dasuki was eventually released by the Buhari’s administration. The court of appeal in Abuja, noted that the DSS and its Director-General acted outside their constitutional powers on the long period of the detention of a Nigerian citizen and imposed a fine of N5 million on them to be paid to Dasuki as compensation for breach of his fundamental right.

Shortly after the arrest, he was arraigned alongside another person at a magistrate court in Umuahia for alleged cybercrimes and for allegedly publishing false and threatening messages through the internet against Mr Ikpeazu.

Five ‘Buhari-Must-Go’ activists commenced a contempt suit against the director-general of the State Security Service (SSS), Yusuf Bichi, for disobeying the court order for their release from custody.

The activists commenced the contempt suit with the filing of a ‘Notice of Consequences of Order of Court, also known as Form 48, on July 30, to push for the jailing of the SSS boss. On August 4, 2021, two days after filing the contempt case, the protesters were released by the SSS after the earlier disobedience of court orders by the secret service.

The spate of disobedience of court orders has continued unabated leading to tensions over the respect for democracy in the country.

The Chief Justice of Nigeria (CJN) Tanko Mohammed in 2019, had vowed to resist disobedience of court orders, although, the situation continues without any sign of dwindling.

A report by Amnesty international noted that the Buhari  administration has disobeyed 40 court orders as at November, 2019.

Kolawole Olaniyan, legal adviser to Amnesty International, opined that President Muhammadu Buhari has shown “stunning disregard for the rule of law and human rights, ignoring Nigerian judges on at least 40 occasions”. The London-based lawyer, also accused  the President of treating judges with disdain.

The Human Rights Measurement Initiative noted that  Nigeria’s score for economic and social rights falls within a ‘very bad’ range.

Judicial Activism, the Only Way Out – Lawyer

A lawyer and public affairs analyst, Awosusi Kehinde while weighing in on the issue noted that the country is drifting towards dictatorship and the only way out was for those who are responsible for such decisions to be held responsible. He opined that there is a need for judicial activism if the menace will be curbed.

“There is a need for judicial activism such as punishing heads of agencies that flout court orders. The disrespect for courts does not naturally portray the country well, and does not also portray them as a respecter of human rights, we are fast drifting to the era of authoritarianism, should things continue like that” he noted.

Disobedience of court orders not in interest of Nigerians -SERAP

The deputy director of  Socio-Economic Rights and Accountability Project (SERAP) Kolawole Oluwadare, while weighing on the issue noted that disobeying court orders is not in the interest of Nigerians. He urged judges to be decisive in holding the sanctity of the judiciary.

“Disobedience of court orders is not in the interest of Nigerians, whether as regards human rights, socio-economic rights or other rights as it were, you would understand that the 1999 constitution has concept of separation of powers and checks and balances. When government decides to disobey the court, they are not only disobeying the constitution but also disrupting the balance of a constitutional democracy.”

Kolawole posited that the judiciary must rise up to the occasion by ensuring that there are punishments for disobeying court orders. According to him, this will help in serving as a deterrent to others.

“Judgment of the court must be obeyed, if the law is continually disobeyed, it means that the essence of the law has been lost”, he stated.

Despite the concerns on abuse of court decisions, the President Buhari-led administration has continued to restate commitment to rule of law and respect for human rights. But this is yet to be seen.