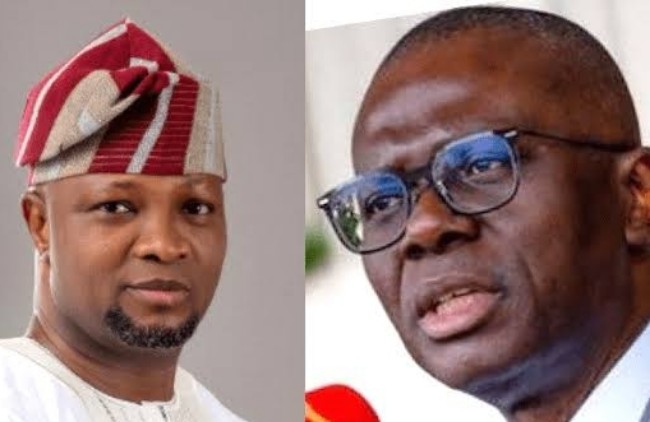 The ongoing verbal fisticuffs between the Lagos State governor and candidate of the All Progressives Congress (APC) Babajide Sanwo-Olu and the governorship candidate of the opposition Peoples Democratic Party (PDP) Mr Abdulaziz Olajide Adediran popularly known as Jandor, might culminate into a very interesting gubernatorial election in 2023.

Both politicians have engaged in accusations and counter-accusations after Jandor alleged that the state government is muffling opposition and critics in the state, by threatening to sanction advertising agencies who display campaign posters of the PDP.

Adediran specifically alleged that the advert agencies contracted by the party had refunded the money paid to them, citing instructions from the state government.

Speaking during a TV interview, he stated that posters pasted by the PDP were allegedly removed by state-backed hoodlums in a bid to prevent the party from presenting its candidates and programmes to Lagosians.

He said, “I know them. I was coming from them. We will not sit and fold our arms and be complaining. Why I have decided to bring this to the court of public opinion is to let people know what is going on. They cannot stop us from pasting posters. We will turn it into guerrilla warfare and we will begin to go out and paste our posters.

“The moment that of Afromedia happened in Falomo here, I placed a call through to the Lagos police commissioner myself and I said to him, ‘CP, this just happened. It was removed.’ We didn’t even know, we thought it was the hoodlums who removed it. It was after investigation that we realised that it was the state government, through LASAA that removed it. The company in question did say to us, ‘They have asked us not to take anything from you. We will refund your money.”

However, the state government has spoken out in response to the PDP’s claim through its oversight body, the Signage and Advertisement Agency (LASAA).

The candidate’s allegation, according to LASAA’s managing director Prince Ademola Docemo, did not demonstrate understanding of the regulations governing outdoor advertising practice in Lagos. Docemo explained that LASAA only regulates billboard structures, not advertising campaigns.

He said, “The decision to deploy any advertisement is the sole discretion of billboard owners who must have registered with LASAA for a licence to hoist advertisement structures in the State.

“Advertising companies determine their clients and the terms of their trade,” the statement reads.

In the unfolding political drama akin to an episode from the Netflix Original “House of Cards,” Governor Sanwo-Olu mocked Adediran’s antecedents while questioning his nous over the management of the complexities of Lagos State.

Sanwo-Olu, who featured in a Channels Television’s programme, Sunday Politics, said categorically that Jandor was too inexperienced to govern the country’s commercial nerve centre.

He further played down chances of the opposition candidate in the 2023 general elections.

The governor said: “Lagos State isn’t a company. We are talking about the heart of the country with an informed audience. You need to ask the candidate of the other party what his experience is. Does he have real knowledge of governance?

“This is all about the experience. Let’s take a tour around the state. What we have done is there to speak. In the space of three years, we have been able to put many things in place. So you can’t compare someone with real experience of governance with a person without it.”

However, Jandor countered Sanwo-Olu’s remarks of him not being experienced enough to take up the affairs of the State. He also addressed the governor as a failure whose “entire career” was made possible by powerful politicians.

In his response, Jandor said, “He has failed and we have suffered for it. It’s time for a new perspective, it is time for a breath of fresh air in Lagos.

“He has never had to build a business from the ground up in Lagos.

“His entire career has been possible, thanks to the interventions of powerful patrons, so he cannot possibly understand why anyone would consider being an independent entrepreneur.”

Why is Lagos APC jittery

These back-and-forth between the rivals has gotten Lagosians agog, considering the one-party nature of the state and while all permutations point to an imminent victory for the APC in the 2023 elections, the emergence of a new political face as a major opponent is a breath of fresh air, amidst the paucity of viable opposition in the state since the return to democracy in 1999.

Those watching with keen interest are however at a loss as to why the government in power in the state would allegedly employ underhand tactics to stifle the opposition in the state. No doubt, a burgeoning democratic system is made more possible by the vibrant interaction and presence of multiple ideas that emanate from different quarters and several political parties.

So why is the Lagos government afraid of letting the PDP sell its programme and candidate to the people of the state? Could it be afraid that the opposition actually has a good product?

Fears have been expressed concerning the veiled threat by Jandor. Many Lagosians fear that the state government’s alleged tactics may bring out the devil in the PDP ultimately leading to violence, if the PDP makes good it’s threat.

Lagosians watch while holding their breaths for the outcome of the expected confrontation.