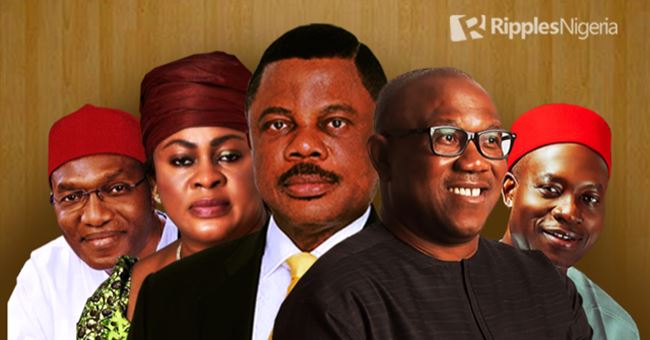 There was palpable relief behind the congratulatory messages sent to the Anambra State Governor-Elect, Prof. Charles Chukwuma Soludo, in the aftermath of the just-concluded governorship elections despite the uncertainties that trailed its conduct, chiefly due to the activities of the Indigenous People of Biafra (IPOB), and the general insecurity being experienced in the region.

Ripples Nigeria on Wednesday reported that Florence Obi, the Anambra State Returning Officer for the Independent National Electoral Commission (INEC) announced the final results from the supplementary elections held at the Ihiala Local Government Area, to bring a conclusion to the poll.

At the end of the supplementary Ihiala election, Soludo polled 8,283 votes, with a margin of over 5,000 votes to defeat his closest rival, Valentine Ozigbo of the Peoples Democratic Party (PDP).

Soludo, the governor-elect, won in 19 of the 21 LGAs in Anambra, while Ozigbo and Ifeanyi Ubah won in one LGA each. Andy Ubah did not win any LGA.

Even with the actual contestants there are other winners and losers of this election with respect to its ramifications for the political landscape in the state, region and the country, at large.

The South-Eastern state is the major winner in the wake of the elections due to initial apprehension within the polity over whether the polls will hold or not.

In the run-up to the election, the candidates had to campaign away from the state due to the stay-at-home mandate issued by the IPOB and the twin threat of general insecurity posed by the ubiquitous ‘unknown gunmen,’ but the intervention of various stakeholders and the neutrality and non-interference of the Federal Government in the politicking of the state ensured a peaceful process which, in the long run, augured well for future polls in the region and the rest of the country.

It was third time lucky for the former Governor of the Central Bank of Nigeria (CBN) Prof. Charles Soludo, after previously vying unsuccessfully for the governorship position twice in the past.

In 2010, Soludo had contested the election on the platform of the PDP, but he came third as Peter Obi, then of APGA, won the election.

On 17 July, 2013, Soludo resigned from the People’s Democratic Party after writing a letter to the National Chairman of the party, Alhaji Bamanga Tukur.

He later joined APGA in preparation for the November 2013 governorship race. In mid-August 2013, he, along with five other qualified aspirants, was disqualified by the APGA Screening Committee.

His 2021 victory was riddled with challenges after a series of legal battles on his nomination and leadership of the party.

It took the intervention of the Appeal Court and the affirmation of the Supreme Court before the electoral commission included Soludo’s name in the candidates’ list.

APGA is another entity that came out as a big winner in the Anambra governorship election, with the poll being a litmus test of its credentials and popularity amongst the people in Anambra and the South-East region.

Political observers had postulated on the unpredictability of the various candidates due to their individual profiles, but APGA surpassed all expectations with victory in all but two Local Government Areas in the state which further cemented its hold on the state.

The next step for the party would be to spread its tentacles to other states in the region, considering the fact that Anambra is the only APGA-led state in the region and this victory is the perfect launchpad for that mandate

Obiano, the outgoing governor of the state, has succeeded in ensuring that his party retained the governorship seat of the state.

He also solidified his base by bringing to power a candidate he anointed in the election, which would serve him well in his future political endeavour.

The APC candidate must be cursing his luck as he has lost another governorship election after a previous loss in 2007.

Back in 2007, Uba was ”elected” as the governor of Anambra State on the platform of the PDP, but he was removed by the Supreme Court, a few weeks after he was sworn in as governor.

His removal was effected after a suit filed by Peter Obi who noted that his tenure was not over as the governor of the state before INEC conducted the 2007 governorship election since he was initially recognised by the court as governor in 2006 in an election conducted in 2003.

In 2010, Uba again contested for the governorship seat on the platform of the Labour Party but lost to Obi.

Will this be the end of Uba in the politics of Anambra? Only time will tell.

On the political front, Valentine Ozigbo is seen as a neophyte regarding battles for elective positions since this was his first shot at the governorship seat of Anambra, though he managed to win in one LGA — Ogbaru.

His next steps will determine his visibility in the politics of Anambra in the coming years.

On hindsight, it was a monumental miscalculation for Okeke, the Anambra State deputy governor, to defect from APGA to the APC in anticipation of a possible victory of the latter.

However, the emergence of Soludo as the Governor-Elect might derail his political ambitions and his next decision will be crucial to his future as a politician to be reckoned with.

Two term governor of Anambra State, Peter Obi, is another loser in the just concluded election.

Obi, a former Vice Presidential candidate of the PDP was expected to deliver the state for his party and tried as much as he could to push Ozigbo into the face of the people, he came short of that as Soludo proved a tough nut to crack.

In August, Oduah, the Senator representing Anambra North at the National Assembly, defected to the APC from the PDP.

The defection of the Senator was celebrated by the national leadership of the APC as a pointer to the fact that the APC had made serious incursion into the South-East and by extension, Anambra State.

Howevere, Oduah could not not even deliver her local government — Ogbaru — for the APC, which was won by the PDP.

The victory of APGA in the Anambra elections has scuttled the ambition of the ruling party to gain in-roads into the South-East region where it has faced vehement opposition.

The ruling party was hoping to shore up its political base in the region, from two governors — Ebonyi and Imo — to three with a win in Anambra, but it was not to be as it became another pipe dream.

What this means is that the upcoming 2023 elections will be a fascinating spectacle to watch in the region.

Despite the aforementioned highlights, the onus is on all stakeholders to ensure a hitch-free handover to Soludo in order to ensure the development of the state amidst its various challenges.