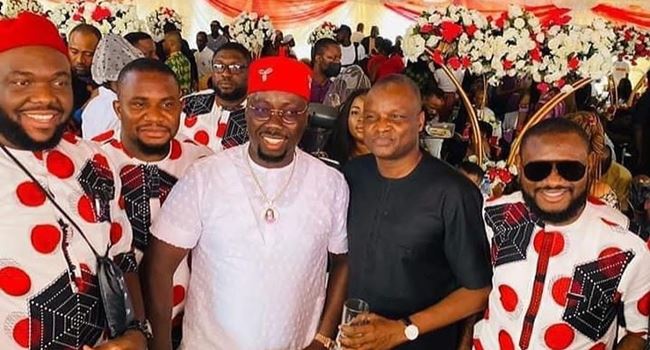 A-list Nigerian celebrities, such as D’Banj, Davido, Kcee and other noblemen of the nation attended the much-publicized funeral ceremony.

The well-attended funeral ceremony was dubbed the ‘burial ceremony of the year’ as it was attended by toasts of the society. Also, the funeral ceremony turned into a mini concert when Nigerian music superstars, Davido, Phyno, D’Banj and Kcee took to the stage to entertain the mammoth crowd.

Aside from the entertainers who enthralled the fans with jams and classic hits, the Deputy Commissioner of Police, Abba Kyari was one of the dignitaries who attended the funeral ceremony.

The Deputy Commissioner of Police was seen posing with Obi Iyiegbu, better known as Obi Cubana, and others at the venue of the funeral.

Equally, an impressive echelon of dignitaries and affluent Nigerians were also present at the burial ceremony to honour Cubana’s late mother.

See some photos below.

The nightlife aficionado, Obi Cubana has been named one of the pioneers of nightlife in Abuja where he has major investments in the hospitality business.

As of Thursday, July 15, there were reports that the Abuja-based billionaire businessman had received over 346 cows from close friends and associates.

The man Obi Cubana, who organized the funeral of the year