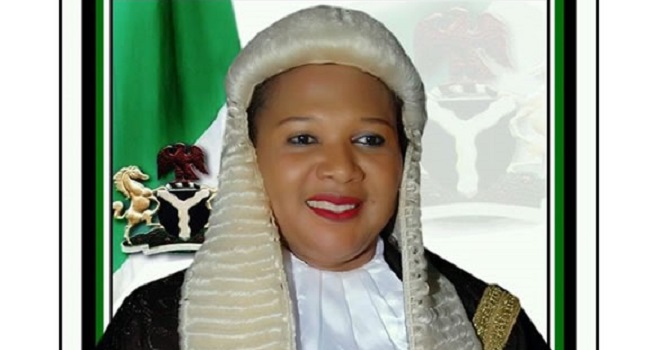 The factional speaker of the Anambra State House of Assembly, Mr. Ikem Uzoezie has obtained a court leave to serve the embattled Speaker of the Assembly, Ms Rita Maduagwu notice of the court process by substituted means.

Some members of the house had on November 13 initiated the impeachement of the sitting Speaker, Maduagwu while Uzoezie was reportedly made the new speaker.

Maduagwu insisted she was the speaker describing her impeachment as null and void.

Crisis erupted at the Assembly forcing the police to lock it down on November 15.

Justice Bature Gafai of a federal high court in Awka gave the order, after Mr Emeka Agbapuonwu, counsel to Uzoezie told the court that while the other defendants have been successfully served, Maduagwu had evaded service.

Agbapuonwu said efforts to serve Maduagwu at her residence met with brick walls when the police restricted the bailiff from gaining entrance.

He also said he could not serve Maduagwu, because the assembly complex has been sealed by the police.

The court then granted his prayer that Maduagwu be served by substituted means.

Uzozie is seeking an interlocutory injunction stopping Maduagwu from parading herself as Speaker, having been impeached by the required number of members of the Anambra State House of Assembly.

Joined in the suit are, Mr Harford Oseke, Deputy Speaker, Governor Willie Obiano of Anambra State and Mr Garba Umar, commissioner of Police in the state as second, third and fourth defendants.

Other reliefs sought include an injunction asking Obiano to stop recognising any other person as speaker other than Uzozie.

He also urged the court to stop the police from hindering him from exercising his duties as the Speaker and stopping members and staff from gaining entrance into the legislative complex.

Gafai adjourned the case until Tuesday for hearing.

How EFCC responded to reports of collecting N10m donation from Ganduje