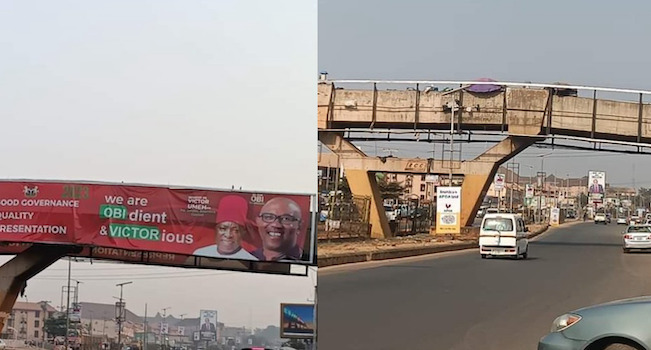 The Anambra State government has demolished some campaign billboards belonging to the Labour Party’s presidential candidate, Peter Obi, in the state.

The exercise was carried out by the State’s Signage and Advertisement Agency (ANSAA) on Saturday.

The Anambra State government had in August last year directed candidates for the presidency, the Senate, the House of Representatives, and the state House of Assembly to pay campaign fees of N10 million, N7 million, N5 million, and N1 million, respectively, before mounting any billboards or posters in the state.

During the exercise, a massive billboard belonging to Obi located at the Nnamdi Azikiwe University Temporary Site Flyover was pulled down alongside that of the party’s candidate for the Anambra Central Senatorial District Chief Victor Umeh.

In a chat with journalists on Sunday, the Managing Director of ANSAA, Mr. Tony Ujubuonu, said the billboards were taken down because the affected candidates did not follow the procedures for mounting of campaign billboards in the state.

He insisted that the development has no political undertone.

There were insinuations that Governor Charles Soludo ordered the demolition of the campaign billboards over a disagreement with the LP candidate last year.

The governor had in October last year dismissed Obi’s chances in the election.

The remark did not sit well with the ex-governor’s supporters, many of whom accused Soludo of petty jealousy.

The pair later met at an event in Anambra last November and embraced publicly.

Ujubuonu said: “In August 2022, ANSAA sent out a letter to all the political parties in Anambra to obtain political campaign permits which would enable them to enjoy campaigns around the state and access to rent available government outdoor media assets and public spaces.

“Also in October, the Agency sent out another letter to the candidates reminding them of the need to obtain the permit. Before commencing enforcement in November 2022, ANSAA ran a one-week sensitisation paid adverts in the media in case someone missed the earlier formally communicated information.

“Many of the political parties and their candidates responded including a good chunk of candidates of the ruling party in the state.

“But sadly, no payment was made by the Labour party candidates both at the national and state House of Assembly levels. Several phone calls and entreaties were made to them through their media managers but they ignored these.

“They have had several campaigns in the state without permits and have their campaign materials everywhere without permits. It’s only fair that all politicians should be treated equally.

“Equally, any political party candidate affected knows that either they are yet to pay or are yet to complete their payments of the political campaign permit.

“We hope this is not a case of entitlement mentality or a brazen decision to disobey the Anambra State Signage and Advertisement Agency. Once again, ANSAA will not allow itself to be drawn into any partisan politics but will continue to serve Ndi Anambra to the best of her ability.”

‘He was on espionage,’ APC campaign explains ejection of Arise TV reporter from Tinubu’s NESG meeting