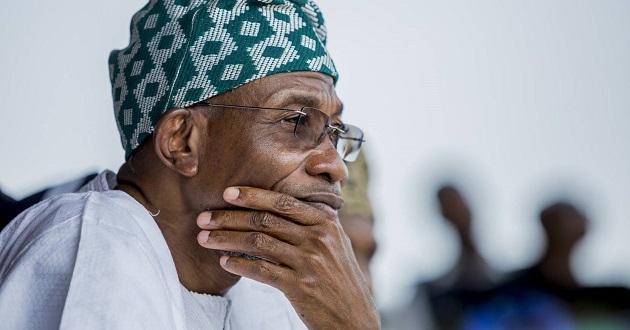 One can imagine the mood in Jagaban’s camp as the results were trickling in. The shame, the blatant resistance to tom foolery and the realisation that the reign of impunity was finally over were easily discernible.

Knowing them very well as true Nigerians, they would still be regaling in self-denial, they would be telling themselves tiny lies giving reasons for the shameful performance in an election that had a near incompetent sitting Governor supported by, I hear, 13 APC Governors with full federal might. Despite all of these the Osun people queued behind the dancing Senator to muddy the faces of the occupying forces.

INEC, after a stupefying count which was occasioned by a heart-rendering black out, eventually announced a result which saw the PDP emerge with just about 400 votes and promptly went ahead to announce the elections as inconclusive.

I really do not understand the legal implications or ramifications of the decision but as a trained political scientist, I am seeing the crystallization of a revolt against the APC, first in Osun State, and this could rise to the very centre in the coming elections.

What played out on the heels of the elections was the crass arrogance of the ruling party, not acknowledging the fact that Aregbesola was a disaster, but carrying along as if the man was a messiah. They went about the campaign with the message of continuity. Continuity of what? Suffering, pillage and arrogance? They went to traditional palaces to laugh at them and make mockery of a proud people. This state houses the cradle of humanity in Ife and the world famous grove in Oshogbo is there. But still our messiahs continued as if the people were slaves, as if they had no voices.

The madness that is in APC can be gleaned from the game that is ongoing. So an Ambode that has performed creditably well at least compared with his colleagues is being pilloried and refused a second term and yet the Osun one who has wreaked untold damage to his people is being propped up as deputy leader and prepared to be sent to the Senate from Lagos. What a comedy of unforced errors.

You see like our elders say, the ones that the gods want to deal with they turn crazy. I tell you APC has gone to the dogs. The gods are working overtime on them. No matter how the rerun elections go, the people have spoken and the rest of Nigeria is watching and has taken note.

Let’s keep the music playing for we would dance our sorrows away. Its dancing time!