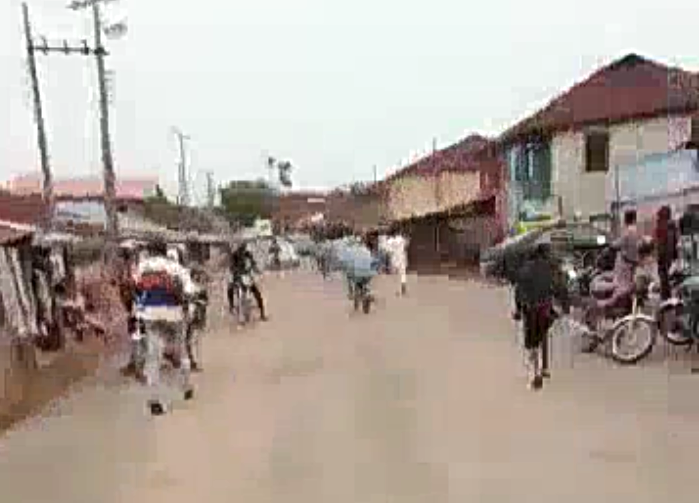 In the Ondo incident which happened on Thursday, the member representing the Owo Constituency 1 in the State of Assembly, Oluwole Ogunmolasuyi, also known as West, tasted the bile of his people when he escaped lynching by
angry youths who hurled stones and sticks at him and his entourage during a constituency tour.

In a video clip shared online, the youths were heard pouring invectives on Ogunmolasuyi while pursuing him and his entourage and it took the intervention of the armed policeman attached to him to whisk him out of the community unhurt.

However, the embattled lawmaker in a statement on the incident, said he was not chased out of his community but was rather attacked by thugs sponsored by Peoples Democratic Party (PDP) aspirants who are after his seat.

The lawmaker insisted that he had performed creditably well in the last three years by facilitating some developmental projects to the community and did not deserve to be humiliated by the people of the community.

In the Plateau incident, the Senator representing Plateau South, Prof. Nora Ladi Dadu’ut, her convoy and 14 journalists in the state narrowly escaped death after an angry mob also attacked them during a Constituency visit.

In the incident which also happened on Thursday, Senator Dadu’ut had just commissioned an ICT Centre and an e-Library in the community and was on her way out of the venue when angry youths descended on her entourage.

According to the Chairman of Plateau State Online Media Practitioners, Friday Bako, who spoke to Ripples Nigeria, a vehicle belonging to the State Council of the National Union of Journalists (NUJ), and the Senator’s pilot vehicle were set ablaze by the mob.

“The unidentified mob, mostly made of youths were said to be angry over the Senator’s silence over the abduction of some people in the community and the arrest of some youths by security personnel for defending their community,” Bako said

“Their rage was predicated on the fact that the Senator did not intervene in the issue to secure the release of kidnapped people or the release of the youths.

“Innocent journalists escaped death by the whiskers with their bus burnt down by the enraged youths.

“The situation was saved by troops of the Operation Safe Haven who were quickly alerted to calm the situation,” he added.

Following the incident, the authorities of the local government immediately announced an indefinite dusk-to-dawn curfew in Namu town and environs in a statement on Thursday evening.