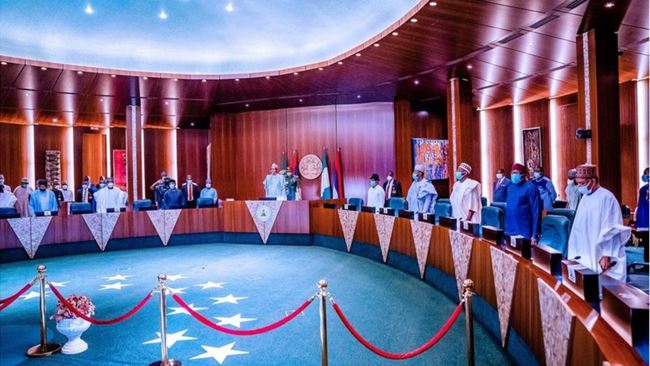 A Federal High Court in Lagos has been asked to dissolve the newly constituted Caretaker Committee of the All Progressives Congress (APC).

It would be recalled, that following in the heels of crisis that had befallen the ruling party soon after an Appeal Court upheld the suspension of the party’s national chairman, Adams Oshiomhole, President Muhammadu Buhari had hosted a meeting of the APC National Executive Council (NEC).

At the NEC meeting, held at the Federal Executive Council (FEC) Chamber of the Presidential Villa on June 25, the National Working Committee (NWC) of the APC was dissolved and a Caretaker Committee, headed by Mai-Mala Buni, governor of Yobe State, was constituted.

The preaident had also directed member with cases in courts concerning the party to withdraw same,.

But in the suit marked FHC/L/CS/789/2020, Arigbaruwo faulted the NEC meeting of the party and urged the court to ascertain “whether having regards to Article 25, paragraph B (i) and (ii) of the Constitution of the party, the 24 hours’ notice given by the 2nd defendant for the NEC meeting held on June 25 was valid and legal”.

The petitioner is equally asking for an order of the court setting aside all the decisions taken in the NEC meeting, which he “declared illegal on the grounds that it was conveyed on June 24 and held on June 25, contrary to Article 25 of the APC Constitution”.

He called on the court to issue an order restraining the caretaker committee members from functioning as managers of the party, adding that the court should grant an order allowing Hilliard Eta, APC National Vice-Chairman (South-South), to pilot the affairs of the party as acting national chairman and to preside at all meetings of the NWC and NEC.

Respondents in the suit are the APC, Victor Giadom, NEC and the Independent National Electoral Commission (INEC).

He said that the matter should be in Abuja where the defendants reside.