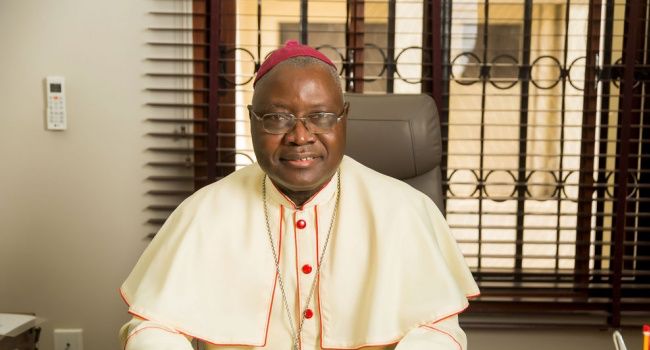 The number of religious leaders who have spoken out on the state of the nation and urging the Muhammadu Buhari-led federal government to do better has increased by one.

Catholic Archbishop of Abuja, His Grace Most Revd Ignatius Kaigama, has called on President Muhammadu Buhari to act fast and address the tension in the country emanating from growing insecurity, hardship, hunger, dwindling economy and industrial actions embarked upon by university lecturers as well as a myriad of problems bedevilling the country under his watch.

Also addressing the 36 governors in the country, Kaigama called on government at all levels to urgently address the issues, as Nigerians are becoming angrier by the day and the consequences could be devastating if the anger gets to a “boiling point.”

The Archbishop who expressed his concerns on Saturday while speaking at the maiden general congress of the indigenous people of the Catholic Archdiocese of Abuja, stated that Nigerians were not only angry, but sad and frustrated with the current state of affairs in the country.

“There is insecurity, hunger, unemployment, and the youths are out of school. Government should be responsible and provide for us.

“Unfortunately, that is not happening and there is a very great degree of disaffection. People are angry, sad and frustrated.

Archbishop Kaigama also condemned the ostentatious display of wealth by political leaders, including the exorbitant cost of party nomination forms for the 2023 elections and pointed out that “if nothing is done about the situation of the poor masses, it might end up destroying the fabric of Nigeria’s nationhood.”

Read also: Cleric warns Buhari to return Nigeria to how he met it or risk Allah’s punishment (Video)

“The insensitivity of our politicians amazes me. They know there is suffering in the land, but I can see an arrogant display of wealth in the way they organize their political activities and events, but there is no money to ensure security, to ensure the university students go back to school, to ensure that people can afford food in the market, and to service the health sector.

“I call on our leaders to rethink and know that there is God and He is watching. The resources we have, let us use it for our people and not personal interest.

“Politics is all about service to the people, and good governance. It is not just about aspiring to gain access to the wealth of the nation and use it in a very arbitrary manner.

“Our leaders must stop and think. Something is wrong. Our people are bottling up their anger for so long. Let the leaders not allow this anger to burst, because it is going to be terrible.

“We hope that something will be done quickly and also with sensitivity to the needs of the people, whether it is electricity, university education, water supply, roads, and above all, security.

“We need these things now. We elected our political leaders to provide these, and they promised to do so, but we are dismayed that they are so incapable and unwilling to provide these basics for the people,” he said.

Kaigama is not the first cleric to speak truth to power, urging government to do better for the citizens and protect them from the raging insecurity that has plagued some parts of the country for several years now.

Recall that the Catholic Bishop of Sokoto Diocese, Most Rev. Matthew Hassan Kukah, has had several face offs with the presidency because he counseled government that all was not well with the country, and that government needed to wake up to its responsibilities.

Also, the Chief Imam of Apo Legislators’ Quarters Central Mosque, Sheikh Muhammad Nuru Khalid, was recently sacked from his position because he spoke out again against the government of the day.

Sheikh Khalid was disengaged following his swipe at political leaders over their lack of concern for the security of lives and property in the country.

Related Topics:#featuredBuhariIgnatius Kaigama
Up Next

IPOB dissociates self from kidnap of herdsmen in S’East, says ‘we’re not kidnappers, terrorists’