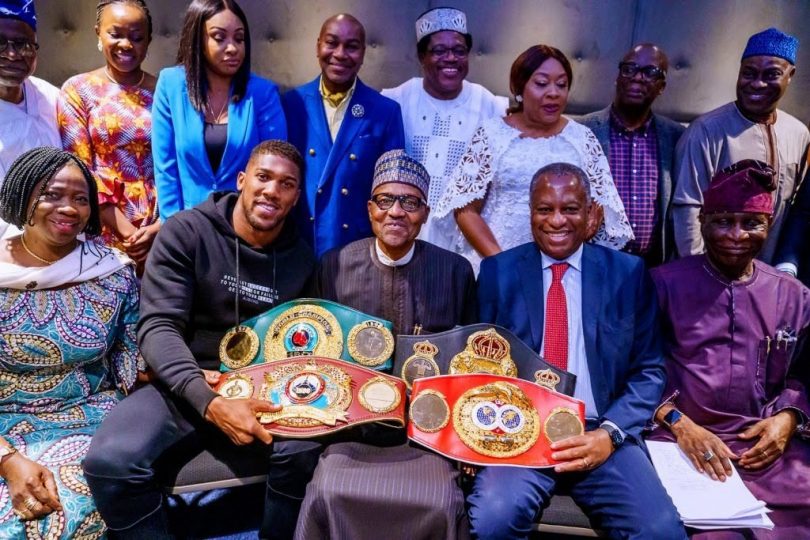 Heavyweight boxing champion, Anthony Joshua presented his belts to President Muhammadu Buhari during a meeting of the latter with Nigerians living in the United Kingdom on Saturday.

Photos from the event were first posted on social media by the President’s official photographer, Bayo Omoboriowo, with a photo that showed Joshua prostrating to Buhari.

Joshua, whose mother is Nigerian and father is of Nigerian and Irish ancestry, defeated Ruiz Jnr last December in a unanimous decision to regain the International Boxing Federation (IBF), World Boxing Association (WBA) and World Boxing Organisation (WBO) titles he lost to the Mexican in June.

Recall that Nigeria’s Minister of Sports, Sunday Dare, had told the Federal Executive Council that Joshua would be presenting his medals to Buhari in a matter of days.

Read Also: ‘Downfall of man is truly not the end of his life,’ Buhari tells Joshua 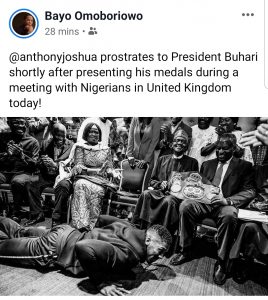 Recall also that after Joshua’s victory in Saudi Arabia, President Buhari, through his aide congratulated the Briton and encouraged him to “bring more glory to Nigeria.”

“The downfall of a man is truly not the end of his life. There’s always another, and better day. This is a lesson we must all learn from you as a country as you seek to bring more glory to Nigeria, and to the boxing profession,” a statement read at the time.

Joshua will in future hope to become the undisputed champion of the world as he looks to win the fourth heavyweight title, which is currently being held by American boxer, Deontay Wilder.

Joshua is set to face Kuburat Pulev, a mandatory challenger via the IBF.