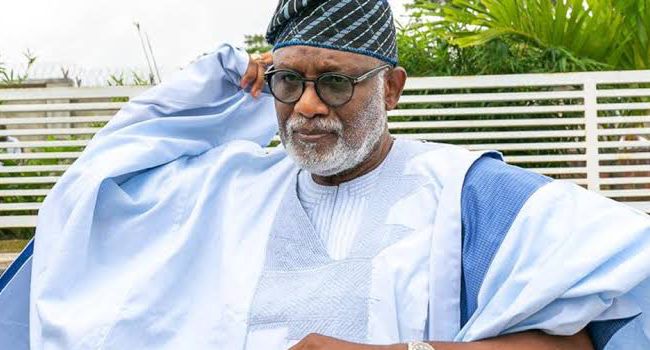 Ondo State Governor and Chairman of the Southern Governors’ Forum (SGF), Rotimi Akeredolu, has told political parties in the country to either field presidential candidates from the South in 2023, or risk losing the election.

Akeredolu, while playing host to members of the Power Rotation Movement (PRM), led by Chairman of the Middle-Belt Forum (MBF), Dr Pogu Bitrus, in his office in Akure on Tuesday, reiterated the need for parties to field southern candidates, insisting that it was the turn of the south to produce the next Nigerian President.

Akeredolu added that any “political party that fields presidential candidate from the north would lose the presidential election because such candidate would not have the support of the southern governors.”

“Those pushing against power rotation in the country are toying with the existence of Nigeria.

“In about two or three meetings, we, the southern governors, have come out and declared that power must move to the south.

“Only a party that is determined to lose will field a northern candidate. You are now a movement of members of political parties coming together. What we stand for is fair and equitable power rotation.

“The only fair thing is that after eight years in the north, the Presidency should come to the south.

“Some of us believe in one Nigeria that is fair and equitable. We have a reason for it and it can be defended.

“Some people have argued that the Presidency should be based on competence. Are they saying there are no competent ones in the south?

“My brother governors from the south, all of us are determined. Whosoever we pick, for as long as it is south, we will support him.

“We are saying the President must come from the south. There are people who merit it in the South-South, South- East, and the South-West.”

ASUU hints at another round of strike, blames Nigerian govt for stalling agreements