Anyone that decides to attack correctional facilities should not live to regret it, Nigerian govt tells prison officials | Ripples Nigeria 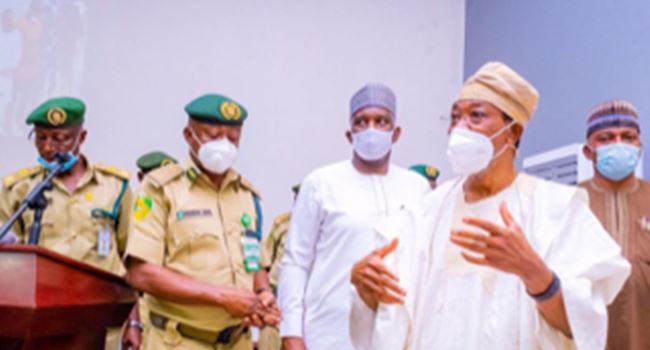 The Federal Government on Friday did not mince any words in expressly condemning the spate of attacks on Custodial Centres of the Nigeria Correctional Service (NCoS), ordering personnel of the Service’s armed squad to ensure that the use maximum force in repelling such attacks in future.

The Minister of Interior, Ogbeni Rauf Aregbesola, issued the order at an emergency meeting with NCoS Squadron Commanders, Field Commanders and Heads of Armed Squads.

He told them, “The weapons you carry and the instrument you have are to be lawfully deployed for maximum effect, in protecting the facilities. Anyone or group of persons that decide(s) to attack them should not live to regret it”.

The Minister noted that some of the inmates who escaped from the custodial centres have been rearrested for murder.

He also warned the personnel against trafficking which he said is one way through which criminals invade the facilities having known that they could smuggle contraband into the facilities.

Aregbesola directed the officers to deploy maximum force rather than minimum force against aggressors, while declaring the centres as “red zones” which must remain unbreachable at all costs.

“Our Custodial Centres must be red zones. It is a quarantine centre for those who by law should not live among free men. When a person is declared unfit to relate with other humans, it is the duty of the authorities to guarantee it.

“We are with you absolutely to make our Custodial Centres inviolable. Attacks on centres is no longer a happenstance. There is a pattern now and we can no longer give any excuse to allow these attacks to succeed. I was at the Owerri centre when we were told about the circumstances surrounding that attack and the question someone asked was, where are the casualties?

“If this meeting must make any meaning at all, you will be held absolutely responsible going forward for any attack on our custodial facilities. I asked representatives of the advanced nations about how it works and they told me a custodial centre is a fortress and a sacred facility that nobody should even have the temerity to attack, not to talk of succeeding at attacking.

“So the current security challenges are just being used as a cover. A pattern is fast emerging and we must take it as such.

“Well, we must commend you for your professionalism, diligence and sacrifice in the performance of your duties. We appreciate you but the line must be drawn where you say enough is enough, where nobody can cross, to dare or to attempt to break our will”.

He further asserted: “The custodial facilities are a symbol of the authority of the Nigerian State. They are sacred and inviolable institutions. You will notice that they are usually built around military fortresses, to show how important they are. This is to deter would-be attackers from inside or outside.

“More importantly, you are armed and positioned to directly guard them and defend their integrity. Your mission is to defend the facilities at all costs. Let me repeat again, defend them at all costs.

“You are empowered by the highest authority in the land to use every means necessary to defend the custodial centres against internal and external aggression.

“….You must not fail because failure means you have contributed to the insecurity in the land by allowing criminals to invade society. This begins with vigilance. You must be on the watch for any instrument or material that could aid criminals in perpetuating jailbreaks. Again, earlier this month, vigilant officers stopped one of their colleagues from smuggling a mobile phone to an inmate in Bauchi. It will be difficult, if not impossible, for inmates to break from inside without receiving assistance from officers, no matter how little.

“Never again must a successful attack happen on any of our custodial facilities, not even in our farms. Whoever attempts it must simply regret it. By the time you make it almost a life and death matter when you attempt a custodial facility, that will be the end of such attack.

“Some of the escaped inmates from Edo have been rearrested for murder, another crime. There was a particular case that immediately he escaped from the centre in Edo, he went straight and killed all those he said facilitated his initial arrest. Luckily he has now been arrested and faces a double jeopardy, one for escape from lawful custody and two, for murder.”

Acting Controller General of the NCoS, John Mrabure, earlier urged the personnel to scale up efforts at securing the facilities.

He noted that the management would continue to punish those who avoid their responsibilities and also reward those who perform remarkably.