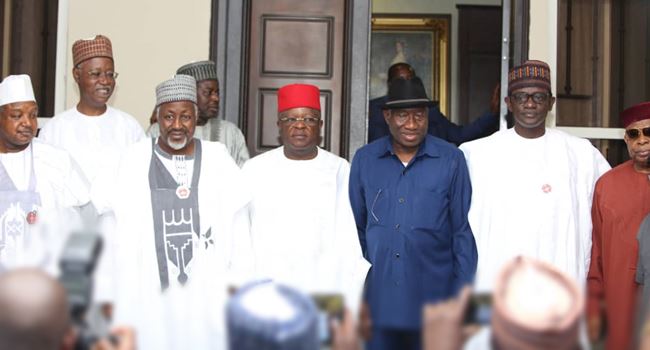 The Chairman of the All Progressives Congress (APC) Caretaker Committee, Mai Mala Buni, on Friday, led some governors elected on the party’s platform to visit former President Goodluck Jonathan on his 63rd birthday.

The team that visited Jonathan at his Abuja residence included governors Dave Umahi (Ebonyi), Atiku Bagudu (Kebbi) and Abubakar Badaru (Jigawa), who all described the ex-president in glowing terms as the pressure for him to vie for the presidency in 2023 gathered momentum.

Also on the trip to the ex-Nigerian leader’s home was the former Senate President, Ken Nnamani.

Read also: ‘Fire up your patriotism to help build our nation,’ Jonathan tells Nigerians in Diaspora

Though it was not clear if the APC chieftains presented a presidential proposal to Jonathan during the visit, it is, however, believed that their visit may not be far from such.

The call for Jonathan to contest in 2023 has been accentuated by some northern leaders who see him as a unifying force around whom a government of national unity could be built after eight years of President Muhammadu Buhari’s presidency.

The proponents of the move believe that with Jonathan as president, northern interests will not be harmed following the establishment of Almajiri schools in several states in the region and appointment of northerners in key positions while in power.

They also argued that the second coming of Jonathan would automatically pave the way for the North to produce another president in 2027.

Related Topics:APCJonathanMala Buni
Up Next