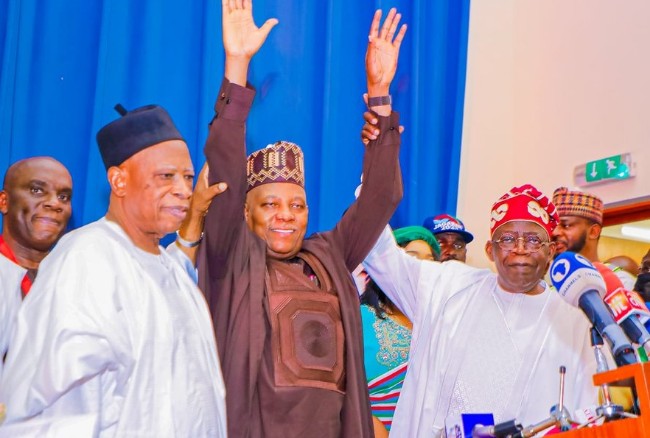 The National Chairman of the ruling All Progressives Congress, Abdullahi Adamu, has rallied stakeholders towards unity while eschewing bitterness that has threatened to divide the party, in the aftermath of its presidential primaries.

Adamu made this rallying call, on Wednesday, during the unveiling of the party’s Vice-Presidential candidate, Kashim Shettima, at the Shehu Musa Yar’Adua centre in Abuja.

The emergence of Asiwaju Bola Tinubu as the party’s flagbearer has led to tensions which was further exacerbated by his choice of a Northern Muslim as his running mate.

Against this backdrop, Adamu, in his statements appealed for unity and peace in order to avoid self-sabotage.

The APC National Chairman stated, “It is time to purge ourselves of the bitterness arising from our individual losses in the party primaries. It is time to submit ourselves to the Will of God and the party and do nothing to sabotage its well-laid plans for victory.

“The other political parties want what we want, and that is, to win and form the next government. If by any acts of omission or commission we give in to bitterness and pettiness or fail to see the larger picture or take any of the political parties for granted, we would constitute an obstacle to the victory of our party.

“As the faithful would like to say, that will not be our portion. Our winning strategy must be anchored on a unity of purpose. I urge us to begin our march now towards the sunrise.”

Adamu further defended Tinubu over his choice of Shettima as his vice, saying, “In our political tradition, the choice of a running mate is the exclusive right of the presidential candidate. He exercises that right with due consultations with the stake holders in the party. Jagaban, being an astute politician, could not have made the choice of a running mate without widely consulting the stake holders in our party, including President Muhammadu Buhari.

“Having made his choice, the party wholly and unconditionally accepts his choice. The party has a duty to work for their victory at the polls next year. At this time in our national development, and given the myriads of our national challenges, we should look for men and women of character, competence and demonstrable evidence of their performance in public or private offices.

“We believe these informed Jagaban’s decision to select Senator Shettima because he fits the bill.Senator Shettima brings to the joint ticket impressive antecedents as a political leader and administrator. Senator Tinubu could not have made a better choice of a running mate. He chose a man he believes can partner with him to undertake the urgent task of our economic recovery as well as social and political development in peace and security.”

Related Topics:AdamuAPC Chairman
Up Next