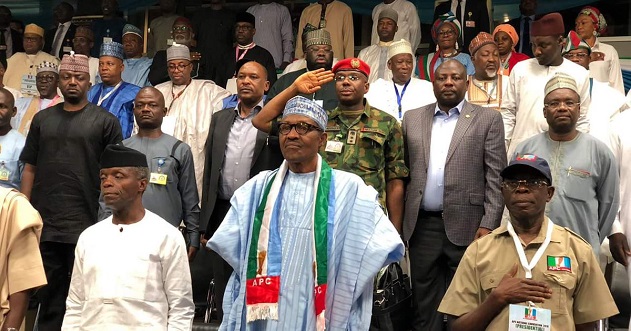 President Muhammadu Buhari has been returned officially as the presidential candidate of the All Progressives Congress (APC) for the 2019 general elections.

This came as the party said he garnered a total vote of 14,842,072 across the states of the federation and the Federal Capital Territory during the party’s direct Presidential Primary to emerge as it’s candidate.

It would be recalled that Buhari polled a total of 15,416,221 votes to defeat the incumbent and candidate of the Peoples Democratic Party, President Goodluck Jonathan, who got 12,853,162 votes, in the 2015 presidential election.

After announcing the figure Fayemi then asked the delegates at the convention, “Do you affirm Muhammadu Buhari as our candidate for 2019 presidential election? And the delegates shouted “Yes”.

“The other party is choosing its candidate in Port-Harcourt, we will look at the records of the opponent, we will look at his pedigree, we will challenge them on their track records. We are ready for the 2019 elections,” Oshiomhole said.

He disagreed with the opposition Peoples Democratic Party (PDP) and some Nigerians who maintain that the anti-graft war being fought by the President Buhari-led administration was selective.

”Mr. President, sometimes I feel you are too mild. I was under threat of impeachment, I had to remove the roof of my House of Assembly in order to survive.

“One of your predecessors used seven people to remove a sitting governor. I am not in anyway suggesting that you do the same,” Oshiomhole added.