It is now clear that former Edo State governor, Adams Oshiomhole, would emerge as national chairman of the All Progressives Congress (APC) at its national convention slated for Saturday (tomorrow).

He is now more likely to emerge unopposed as the only remaining contender in the contest, Clement Ebri, a former governor of Cross River State, has also withdrawn.

With Ebri’s withdrawal, Oshiomhole, said to be President Muhammadu Buhari’s choice for the office, is now the only contender for the position.

Every obstacle towards Oshiomhole becoming the party’s next chairman was cleared on Thursday after Ebri in a letter, which copy was forwarded to the chairman of the APC National Convention Committee, Jigawa State Governor Badaru, said he was withdrawing from the chairmanship race.

He said in the letter, “Following deep consultation my family, friends, associates, party leaders and other stakeholders in the progress of our great party, the APC, I have reached the decision to withdraw my candidacy from the race for the national chairmanship of the APC. This decision has been taken in what I consider to be in the overall interest of the party …”

Also in a press statement issued late Thursday, Ebri said, “I believe that those who occupy formal positions in the APC are the helmsmen of the Nigerian ship of state. What happens in the leadership of this country’s ruling party, the APC is directly responsible for whether we can deliver on our promises to our people to provide them with a new lease of life. This was the core conviction that drove me to declare my candidacy for this office in the first place.”

READ ALSO: APC CHAIRMANSHIP: Oshiomhole left with only one opponent

Earlier, two of the contenders for the chairmanship position Ibrahim Emokpaire, an American based member of the party, and Osereimhen Osunbor, also a former governor of Edo State have withdrawn from the race.

Meanwhile, there are speculations that Ebri may have been pressured to step down ahead of tomorrow’s national convention.

Rumours are also rife that pressure is being mounted on some other aspirants seeking other positions to step down for the aspirants whose names are in the alleged ‘unity list’ of the party. 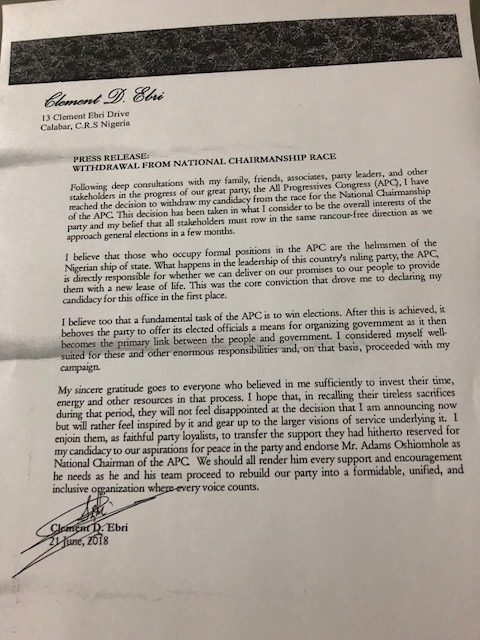