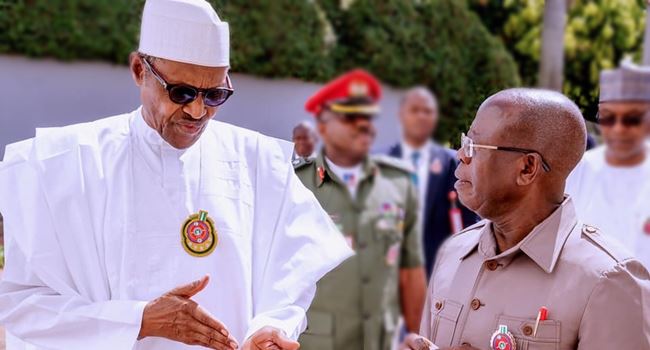 According to sources at the meeting, the President, in a bid to rein in the belligerent chairmen, shouted at them, ordering them to sit down and be quiet.

The meeting also had the National Chairman of the party, Adams Oshiomhole in attendance.

Bukar, in his speech at the meeting hit out at some governors elected on the platform of the party, alleging that they worked against its victory in the November 16 governorship elections in Bayelsa and Kogi states.

Bukar added that the governors in their desperation to nail Oshiomhole worked against APC candidates in the recent governorship elections won by the party in Kogi and Bayelsa states so they would latch on those losses to advocate his removal.

Bukar said: “Mr President, Sir, let me also express our recent worries regarding the activities of some of the governors who are undermining the efforts of the national chairman of our great party, Adams Oshiomhole, to reposition the party by plotting his removal.

“It is more worrisome knowing full well that they are not doing this because the national chairman is not performing his duties, according to the constitution, but they are fighting him due to their 2023 presidential ambitions when it is a notorious fact that Mr President had just commenced his second term in office a few months ago.

“It is really unfortunate, Your Excellency, that just after we won an additional state in the South-South, which is Bayelsa and consolidated on our hold on Kogi, these governors have been busy collecting signatures, spending our hard-earned resources in both covert and overt campaigns for the removal of Adams Oshiomhole.

“We believe Sir that the affected governors don’t mean well for your administration because after Nigerians voted massively for Your Excellency, all hands should have been on the deck to give Nigerians the desired dividends of democracy and not create crisis where there is none.”

“We want to appeal to Your Excellency to use your good offices to caution these governors so they will not destabilise the party. We need stability at this point and not anything that will cause distraction. And we use this opportunity to reiterate the vote of confidence, which we earlier passed in our national chairman, Comrade Adams Oshiomhole, and we appreciate Mr President for the cooperation that you have been giving to the NWC.”

Bukar appealed to the President to reward them with board appointments and to stop the trend of appointing members of the opposition in place of hard-working members.