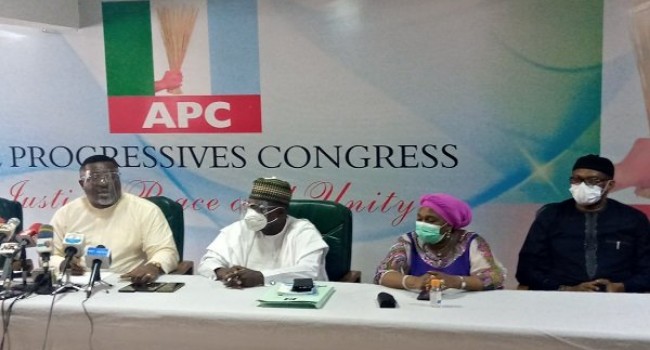 The National Working Committee (NWC) of the All Progressives Congress (APC) has affirmed former Oyo State Governor, Abiola Ajumobi as the acting national chairman of the party.

This was announced by Hilliard Eta, who led other members of the NWC to the party’s Abuja secretariat on Wednesday, where they also announced that the party’s governorship primary for Edo State will proceed as planned.

Ajimobi was National Deputy Chairman South until his appoitnment and affirmation by the NWC.

The affirmation was made at its 45th emergency meeting which had 15 out of 21 members of the NWC in attendance.

The meeting also announced a seven-man Edo State Governorship Election Panel to conduct the June 22 primary, With Governor Hope Uzodinma and Senator Ajibola Basiru, the spokesman for the Senate, to serve as chairman and secretary respectively.

The announcement was made by Chief Hilliard Eta, who was elected to chair the meeting.

He also announced the composition of a five-man Election Appeal Panel headed by Prof. Mustapha Bello and Dr. Kayode Ajulo as the secretary of the panel.

According to Eta, the Deputy National Secretary of the party, Hon Victor Giadon has ceased to be a member of the NWC having resigned to contest for Deputy Governorship position of Rivers State during the last general elections.

It would be recalled that Giadom had declared himself as the authentic acting National Chairman of the APC, relying on the March judgment of an FCT High Court.