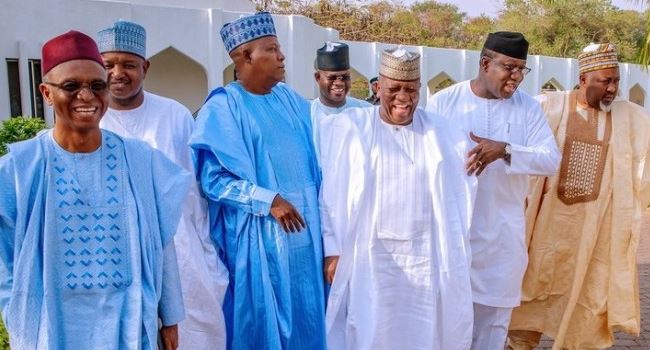 Governors of the All Progressives Congress (APC) will today (Friday) hold an emergency meeting in Abuja over Wednesday’s ruling of the Supreme Court in the case between the Ondo State Governor, Rotimi Akeredolu, and Eyitayo Jegede, the candidate of the Peoples Democratic Party (PDP) in the state’s October 2020 gubernatorial election.

The Supreme Court judgment had attracted controversy, as the Judges at the Apex Court had reportedly unanimously agreed that it was illegal for Mai Mala Buni to be the governor of Yobe State and also hold an elective position in the party, noting that a sitting governor cannot hold a dual position of governor and party national chairman.

However, four out of the seven-member panel of judges dismissed Jegede’s appeal over his failure to add Buni as a defendant in the suit.

Meanwhile, the Minister of State for Labour and Employment, Festus Keyamo, had in a memo which leaked on Wednesday, called on the party’s leadership to urgently remove Buni as chairman of the caretaker committee, warning that the party risks imminent legal tussles if the governor remains its interim leader.

It was gathered that following the controversy that greeted the Supreme Court ruling, APC governors will meet today to discuss the state and local government congresses scheduled to hold on Saturday (tomorrow).

APC Chairman in Borno State and Chairman of the party’s Chairmen’s Forum, Ali Bukar Dalori, gave hints that the outcome of the meeting would determine whether or not the party would go ahead with the state and local government congresses.

“You know I am a loyal party man. The party communicated to us to continue with preparations for the congresses pending the outcome of their meeting.

“The state governors are meeting tomorrow (today) so I cannot categorically say whether we’ll hold the congresses or they will say we should postpone them.

The governors have converged on Abuja for an emergency meeting tomorrow. After that meeting, we’ll know the position of the party and the direction they want to follow. Don’t worry, by tomorrow we shall know what’s going to happen,” Dalori was quoted to have said.

Ripples Nigeria reported that Abe had in a statement on Thursday said Keyamo’s argument based on his interpretation of the judgement of the Supreme Court in Jegede Vs Akeredolu was baseless since the defence of Buni, who heads the National Caretaker/Extraordinary National Convention Planning Committee (CECPC) of the party was never heard.

He expressed surprise over Keyamo’s position on the matter, especially his call for the party to immediately suspend all preparations for the forthcoming congresses.

However, he noted that the party leaders who had reservations about the constitution of the caretaker committee were informed that the decision to establish the Committee was reached after extensive legal examination of the issues confronting the APC at that time by a body of eminent lawyers in leadership positions in the party.

“The Buni- led caretaker committee in the determined effort to reposition the party and carry out its difficult assignment has adjusted the seating arrangements in a lot of states and this may explain the stand that some party leaders will take on this issue. But it is important that we deal with facts and the law,” he said.