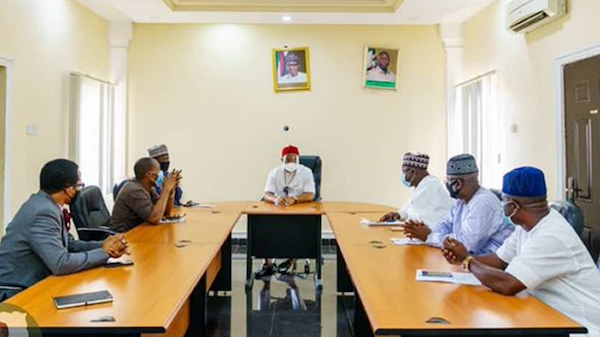 The Progressive Governors Forum (PGF) on Sunday restated its determination to find lasting solutions to terrorism in the North East.

The Chairman of the PGF, Abubakar Bagudu, who stated this when he visited Borno State Governor, Babagana Zulum, said the forum would mobilise the needed funds to improve the security architecture in the North East.

He added that the governors are fully committed to the resettlement of the internally displaced persons in the region.

Bagudu was accompanied to the Borno State by his Jigawa State counterpart, Mohammed Badaru.

They were in the state to sympathise with Governor Zulum over the recent attack on his convoy by Boko Haram fighters in Baga local government area of the state.

The Kebbi State governor disclosed that the PGF team was in Borno to encourage the government and people of the state.

He said: “This challenge facing the state is for all Nigerians and it’s not just for Borno people alone.

“We will continue to urge the security agencies to do more.

“We will continue to mobilise more funds to support both the security agencies and the resettlement of the displaced people so that they can go back to their normal lives.”

In his address, Badaru commended President Muhammadu Buhari for the success recorded in the counter-insurgency campaign.

He, however, called for more funding and enhanced security arrangement to restore lasting peace in Borno and the North East in general.