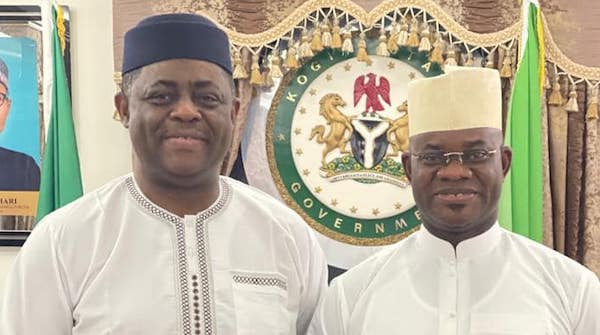 The leadership of the All Progressives Congress (APC) has commenced talks with a former Minister of Aviation, Chief Femi Fani-Kayode and four Peoples Democratic Party (PDP) governors over a possible switch to the ruling party, The PUNCH reports.

The newspaper reports that the ex-minister met with the Chairman of the APC Caretaker Committee, Mai Mala Buni; and the Kogi State Governor, Yahaya Bello, at the party chairman’s Guest House in Abuja on Sunday.

The report added that Fani-Kayode had earlier met with Governor Bello in his Wuse Zone 6 residence in Abuja before the duo proceeded to Buni’s guest house for a closed-door meeting.

A top member of APC, who confirmed to the newspaper that the party had approached the fiery ex-minister about a switch to the party, however, said he has not made any commitment yet.

But he described the meeting as fruitful, adding that “things are looking bright.”

He also refused to disclose the identities of the four PDP governors holding talks with the APC leadership on their plan to pitch tent with the ruling party.

Fani-Kayode is one of the vocal critics of President Muhammadu Buhari’s administration.

READ ALSO: Kukah has nothing to apologise to Muslims for —Fani-Kayode

He dumped the defunct Action of Nigeria (ACN) for PDP ahead of the 2015 general election.

The ex-minister was later appointed the spokesman of ex-President Goodluck Jonathan’s campaign organization for the 2015 election.

Many had argued that he dumped the ACN for PDP in 2014 in a bid to escape prosecution for alleged corruption during his stint as minister of aviation.

It remained to be seen if the same desire will influence his decision once more as APC knocks on his door for a possible return to his old hunting ground.