APC makes u-turn, insists on direct primaries for everyone 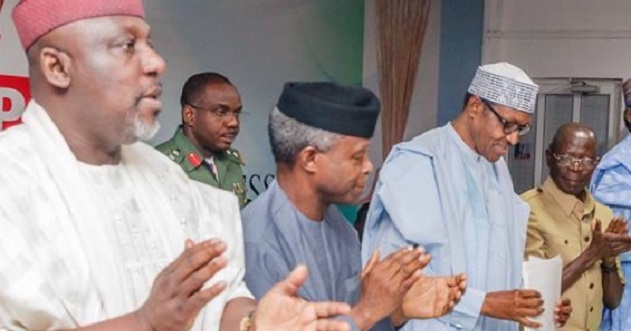 The ruling All Progressives Congress (APC) has said it would use direct voting for primaries into all elective offices for the 2019 general elections.

This implies that the party has cancelled all earlier decision to allow state chapters choose between direct and indirect primaries.

It would be recalled that the governor of Plateau State, Simon Lalong, had said after the National Executuve Committee (NEC) meeting of the party on Thursday in Abuja that most state chapters of the party opted for indirect primaries, which the party accepted provided they write to the National Secretariat for approval.

Lalong had said: “The constitution of the party provides for either direct, indirect or consensus but for the presidential election we all agreed that we will adopt direct primaries for the presidential election. Also a recommendation was made by the NWC that the other states should adopt the indirect mode but there may be situations that this might be difficult in the state looking at their peculiarities. So if there are such difficulties, they can apply, following the process.”

Also, on Friday morning, the party reaffirmed the reports from Thursday’s meeting of its National Executive Committee (NEC) which indicated that direct election would only be adopted for the presidential primaries while states were at liberty to use either of direct or indirect primaries with approval from its national leadership.

But on Friday evening, the Acting National Publicity Secretary of the party, Yekini Nabena, in a statement, said: “The 30th August, 2018 resolution of the All Progressives Congress (APC) National Executive Committee (NEC) on the mode of Primary Election has been subject to inferences and misleading interpretations.

“As an update to the earlier released statement, we wish to make the following clarifications on NEC’s resolutions on Mode of Primary Election: Primary elections into all elective offices shall be by Direct Primaries; NEC resolved to adopt Direct Primaries for the nomination of the Presidential candidate and all other Primaries; The Party’s constitution though provides for Indirect Election and Consensus, however, the use of Indirect Primaries is conditional and dependent on logistic impediments; peculiarities and need of a given State that makes it unable to use Direct Primaries.

“The State Executive Committee (SEC) shall in consultation with aspirants and other critical stakeholders of the Party in a given State forward for the consideration and approval by the National Working Committee (NWC), if Indirect Primaries is to be adopted. The adopted mode shall now be applied to all categories of the Party’s Primary Elections i.e. State Assembly, Senate, House of Representatives and for the Governorship Elections.

“The request for Indirect Primaries must be signed by majority of the State Executive Committee and critical stakeholders in attendance at the meeting where such resolution is reached.

“Direct Primaries will among others ensure fairness; create a level playing ground for contestants; eliminate corrupt tendencies usually associated with the delegates system and ultimately ensure full participation of party members at all levels”.